Heavy rains lashed Mumbai and neighbouring areas on Monday causing waterlogging and traffic jams at several places.Many trains were stopped and several were running late as rain waters inundated the tracks. Vehicular traffic on the roads was also redirected as many roads were closed due to flooding.An IMD forecast said there will be continuous rain in Mumbai and suburbs for rest of Monday and Tuesday.Highlights:

Western Railway suburban services are running normal with minor delay due to low visibility in some areas. There is no water logging or disruption in the section.

Low visibility at airport, but no warning for flights yet: Official

Visibility at Mumbai airport was “not very good” but flights were operating according to schedule, a MeT official said, adding no warning has been issued for the aviation sector so far.

The Mumbai University said examinations will be rescheduled for students who could not appear for it today.

Local train services running with delays. Trans-harbour line services on CR’s Thane-Vashi section are running about 5-10 minutes late while the Western railway services are about 20-30 minutes late due to flooding in the tracks at Nallasopara . 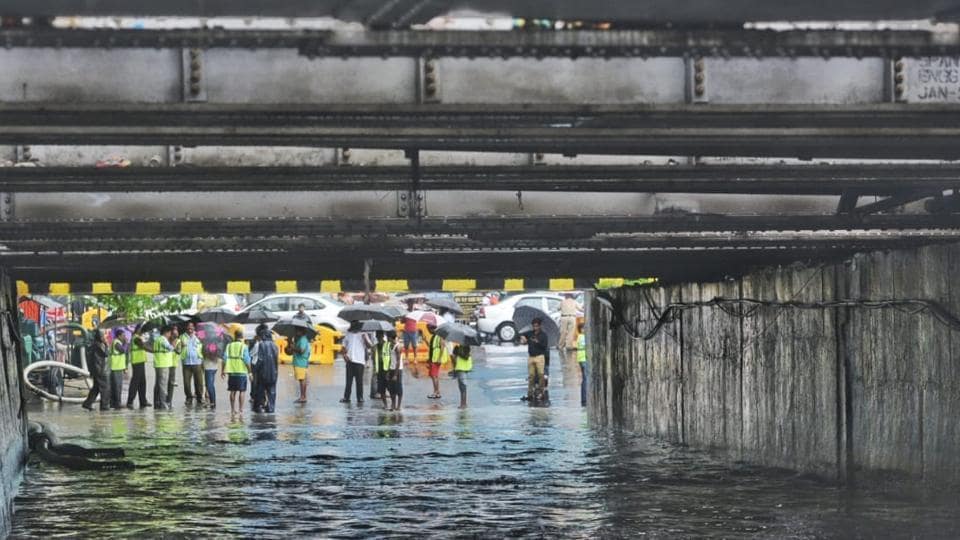 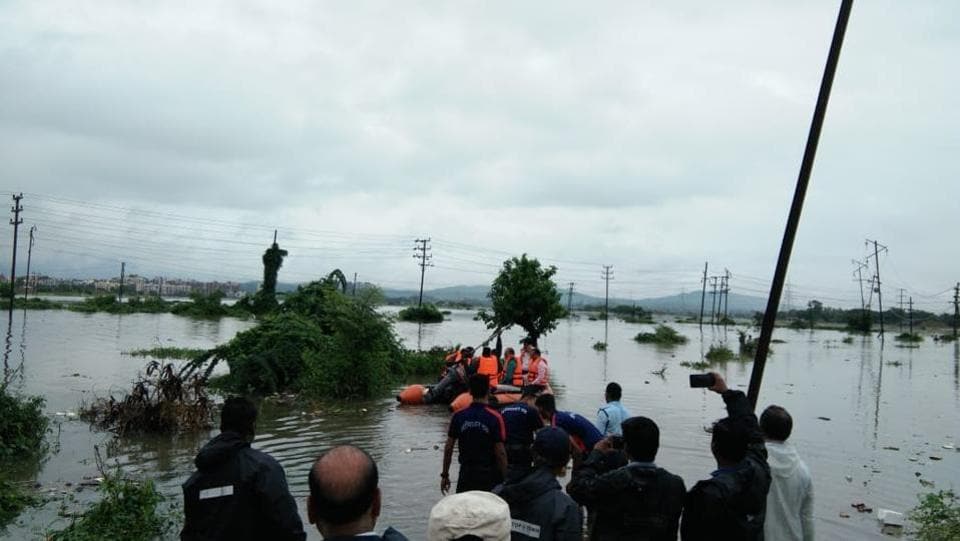 Dahanu receives highest rainfall in the country in last 24 hours

Dahanu in Palghar recorded 354 mm rain (extremely heavy rainfall between 8.30 am Sunday and 8.30 am Monday - the highest rainfall recorded in the country in the last 24 hours, according to IMD.

As flood level reduced to 130mm at Nallasopara, WR has resumed Chuchgate-bound fast local services from there with restricted speed.

Precautionary holiday declared for schools, colleges in Mumbai Metropolitan Region for the safety of the students due to the heavy rainfall experienced in the city and the suburban areas. Heavy rains forecasted, every one is advised to stay safe. 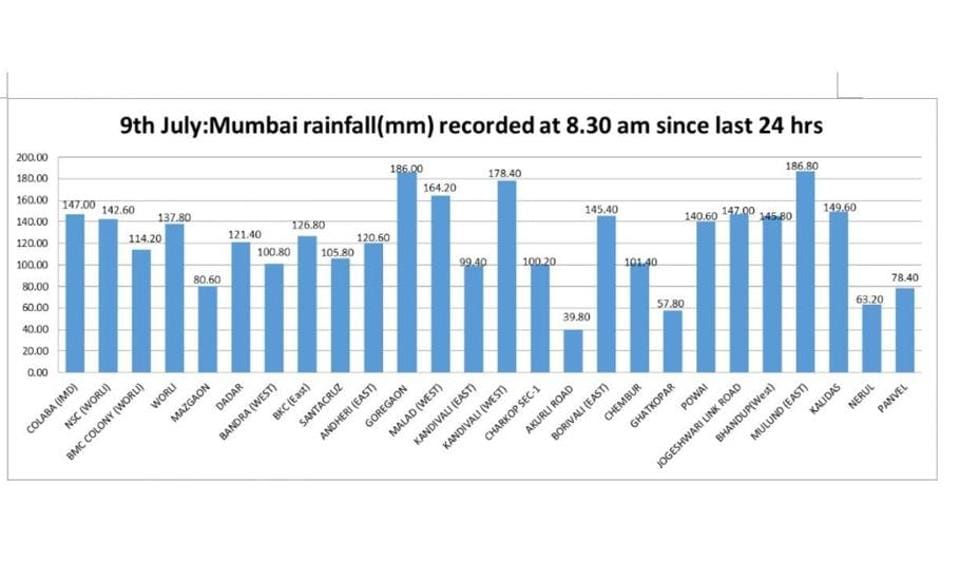 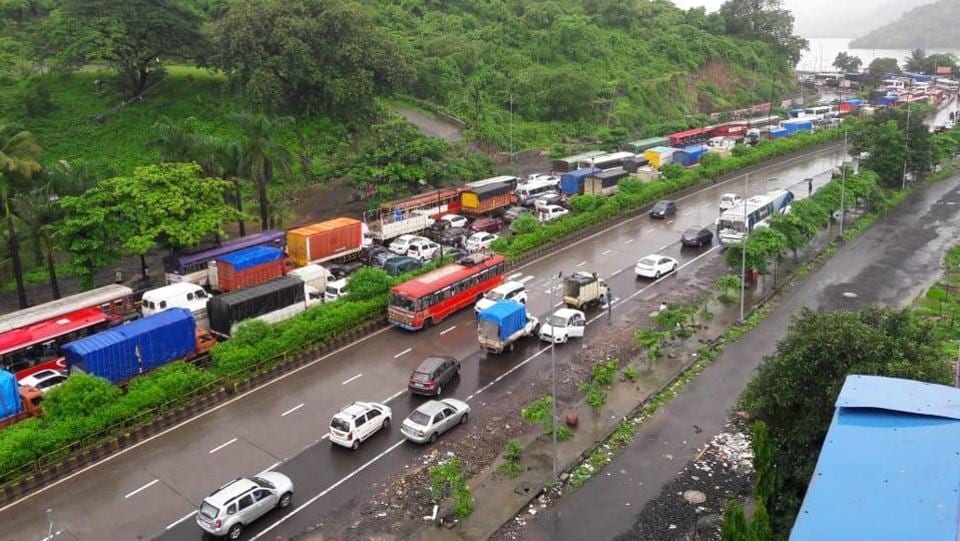 Kalyan-bound local trains are running again after it was halted as part of a wall collapsed at Sandhurst Road station.

CCTV footage emerges of woman on bike crushed under bus

A 40-year-old pillion rider was crushed to death by a speeding private bus after she fell off a two-wheeler that hit a pothole during heavy rains in Kalyan of Maharashtra’s Thane district on Saturday.

However, express and locals from Palghar, Dahanu were moving slowly towards Mumbai. 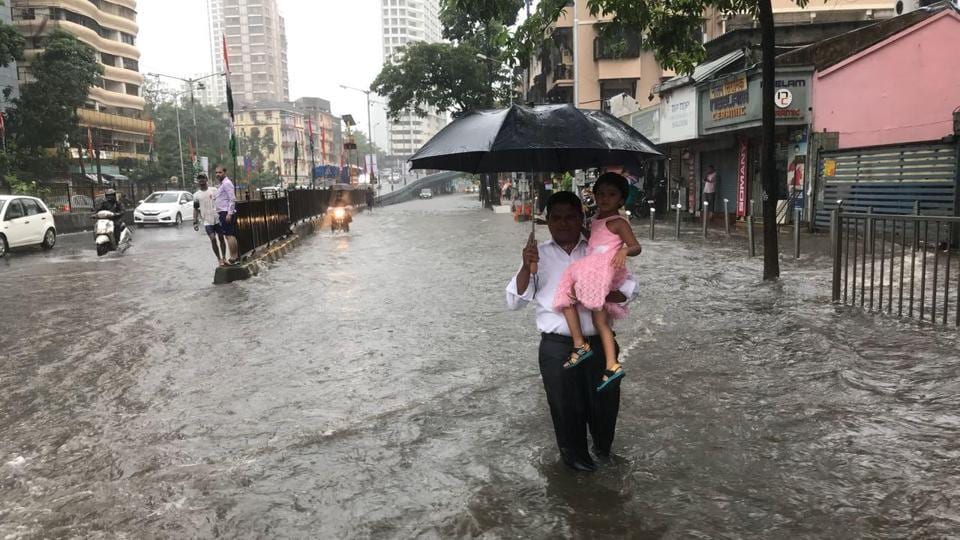 Slow train services between Kalwa and Mumbra stations on Central Railway came to halt due to water logging on tracks.

Trains are still running. It's with caution between kalwa and Thane as a precautionary measure

Due to bad weather, operations of private, chartered aircraft and choppers at Juhu aerodrome have been suspended till 3pm.

Railway says up to 180mm water in tracks at Nallasopara.

In view of water 180 mm above rail level due to incessant rains, traffic on UP fast line at Nallasopara Station has been stopped resulting in delay of 15-20 mins in local services & regulation of various Mumbai bound trains at/beyond Virar. Caution order working on other 3 lines pic.twitter.com/E7QaALslnm

Rains to continue throughout the day: IMD

Continuous rain with heavy to very rain at a few places and extremely heavy rain at one or two places in Mumbai and suburbs for rest of Monday and Tuesday.

Waterlogging at several places in Mumbai

Due to flooding at Kings circle Gandhi market, north bound road from Maheshwari Udyan to Sion hospital has been closed.

The traffic has been diverted through Bhaudaji Road and Southbound through the flyover.

Andheri Subway has also been closed due to water logging.

No fast trains from Virar towards Churchgate

Fast trains from Virar to Churchgate were not operating.

12 trains stopped at Virar station and beyond

Heavy traffic near Kopra Bridge in Kharghar. People stuck in jam for more than 20 minutes.

Several trains halted due to waterlogging

Several trains have been halted due to waterlogging on tracks between Virar and Nallasopara.

1/2 Due to very heavy rains since last night, water on tracks at Nallasopara. Traffic on UP fast line stopped as water reached 180 mm above rail level. Trains running on other 3 lines at Nallasopara on restricted speed. #WRUpdates @drmbct

2/2 Due to water over 180 mm on Up fast line at Nallasopara, traffic stopped on it, hence there is delay of about 15 mins in suburban trains. Other 3 lines at Nallasopara working with trains running on restricted speed #WRUpdates @drmbct

Traffic police advises Mumbaikars to venture on the roads only if necessary.

Traffic was building on the Western Express way, SV Road and Link Road. Traffic at Dadar, Matunga and Sion was also moving at a slow pace due to waterlogging in Hindmata at Dadar and Gandhi Market area in Kings Circle.

There was waterlogging outside Dombivli railway station. 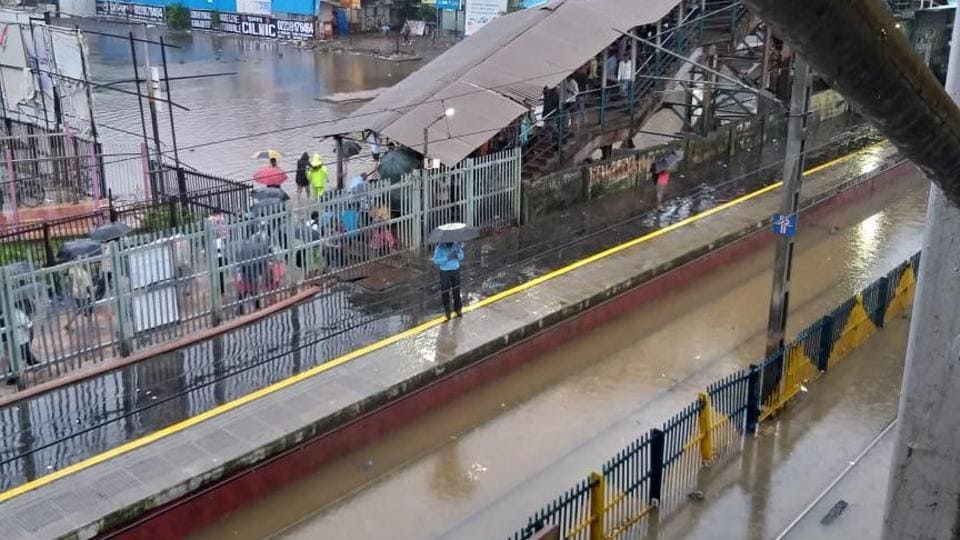 Trains are running at restricted speed at Nallasopara due to water on tracks causing some delay.

WR Suburban services are running normal. There is no disruption due to rains #WRUpdates

Thane received 141.99 mm of rainfall in 24 hours, 25.66 mm in the last one hour. There was waterlogging at several places including Panchpakhadi and Vandana bus stop.