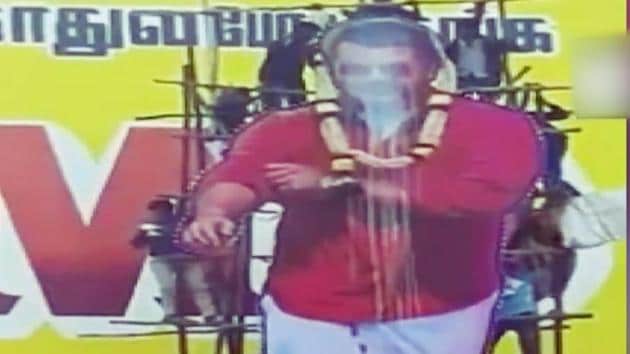 Five people were injured in Thirukovilur, Tamil Nadu after a cut-out of actor Ajith collapsed during 'paal abhishekam' (pouring of milk on the cut-out).

Fans revere the actors and garland their cutouts during the release of their films. Ajith's new film Viswasam will hit theatres on 14 January.

Protests in Canada against attack on Hindus allegedly by Khalistani elements

Watch: Cops rescue man from rail track seconds before being mowed to death

‘TMC says one thing in Delhi, does the opposite in Bengal’: Owaisi lashes out

‘Not defending but…’: Maharashtra DGP responds to corruption in Police dept

When will fuel prices reduce? Sitharaman answers with a ‘dharam sankat’ remark

Govt on thaw with Pakistan & China; updates on threats to Indians in Canada