The Bharatiya Janata Party (BJP) promised free Covid-19 vaccines for Bihar in its election manifesto released on Thursday, setting off a storm of criticism from Opposition parties and public health experts who questioned the decision to link politics with immunisation, and prompting similar announcements from two state governments.

“As soon as Covid-19 vaccine is available for production at a mass scale, every person in Bihar will get free vaccination. This is the first promise mentioned in our poll manifesto,” said Sitharaman.

The promise was the first of the 11 points. 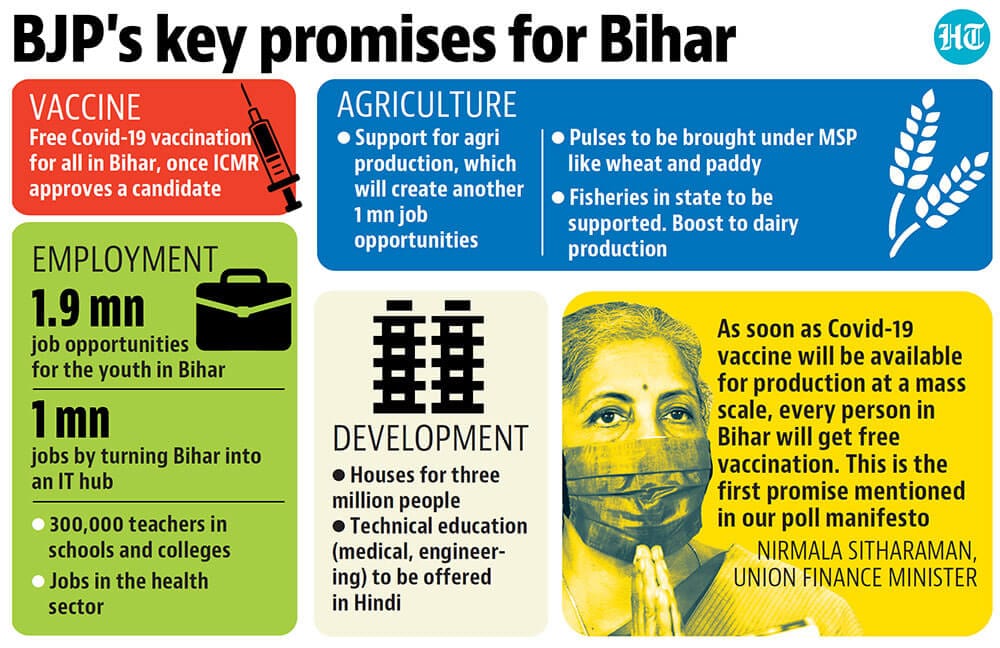 Though the party later clarified that the vaccine would be delivered to all citizens, and that it was up to state governments to give it for free after receiving it at nominal cost from the Centre, experts questioned its inclusion in a poll manifesto, and argued this was different from a policy announcement by the central or a state government.

The manifesto – carrying the tagline “BJP hai to bharosa hai” (in BJP we trust) – said the free vaccine will be made available once it has been cleared by the Indian Council for Medical Research, but mentioned no additional details about funding or source of the vaccines.

“It’s our resolve that once the vaccine against the coronavirus has been cleared by the ICMR, we will make it available to the people of Bihar free of cost,” said the manifesto.

Bihar has seen 208,000 infections and lost roughly 1,000 lives to the virus; the state has a population of 104 million, and goes to the polls to elect members to the 243-member assembly in three phases: October 28, November 3 and November 7. Results are out on November 10.

Opposition parties said linking public health to elections was a “degeneration of politics”.

“It is unfortunate if vaccine for a pandemic becomes a part of a manifesto and a poll issue,” said Rashtriya Janata Dal Rajya Sabha member Manoj Jha.

“GOI (government of India) just announced India’s Covid access strategy,” senior Congress leader Rahul Gandhi wrote on Twitter. “Kindly refer to the state-wise election schedule to know when will you get it, along with a hoard of false promises.”

Later in the day, two other states made similar announcements.

Tamil Nadu chief minister K Palaniswami assured free vaccines for all people. “I would like to announce that as soon as the vaccine is developed (and made available to states) all people in Tamil Nadu will be immunised and the government shall bear the cost,” he said in Pudukottai.

“We have taken many steps to save the people from Covid-19. Today, it is completely under control. The work of making a Covid-19 vaccine in India is fast progressing; whenever the vaccine is ready, it will be made available to all citizens of Madhya Pradesh free of cost,” he tweeted.

In her morning press conference, Sitharaman said the country was on the verge of producing three vaccines after different stages of trial.

Currently, Bharat Biotech’s Covaxin and Zydus Cadila’s ZyCov-D are the indigenous vaccine candidates under phase III trail in India. Oxford-AstraZeneca’s vaccine candidate’s trial is also underway in India as part of a production-and-testing deal with Pune-based Serum Institute of India (SII). Globally, 44 vaccine candidates are under various clinical trial stages and even optimistic estimates say a shot is unlikely to be available until next year.

“Providing vaccines to people against Covid-19 is an issue that needs to be seriously dealt with by the government…Flashy or premature statements don’t mean anything. It is obvious that political parties should stay out of it,” said Dr Vivekanand Jha, executive director, George Institute for Global Health.

But the BJP defended its promise.

“It’s a manifesto. Centre makes vaccines available at a minimum price, we promised our government in Bihar will make it free of cost. Political parties should be sensitive when it comes to public health. We’ll fulfil our promise,” said MP and Bihar BJP in-charge Bhupender Yadav.

Bihar deputy chief minister Sushil Kumar Modi said since health is a state subject, it is up to the state to promise whether it will provide the vaccine free to people.

Senior leader Amit Malviya said the Centre will provide the vaccines to states at a nominal rate and it is for the state governments to provide it free to its people.

“BJP’s manifesto promises free Covid vaccine. Like all programs, Centre will provide vaccines to states at a nominal rate. It is for the state govts to decide if they want to give it free or otherwise. Health being a state subject, Bihar BJP has decided to give it free. Simple,” he tweeted.

The BJP’s ally, Janata Dal (United) welcomed the manifesto. “It’s a promise made after accessing the ground realities. Both BJP and JD(U)’s thought process is involved in it,” said JD (U) spokesperson Rajiv Ranjan.

The BJP manifesto also focused on generation of jobs, which has been at the forefront of the Bihar election campaign after RJD chief Tejashwi Yadav promised 10 million jobs if elected to power – a pledge that helped drive massive crowds to his rallies.

The document claimed the NDA government will recruit 300,000 teachers, create 500,000 IT jobs, 100,000 health sector jobs, and one million jobs by interlinking of farmers produce organisations and developing a supply chain for produce like maize, fruits, vegetables, makhana, medicinal plants, etc.

“If we total this, we would be creating job avenues for 1.9 million people in the next five years,” said BJP state president Sanjay Jaiswal.

The JD(U), whose president Nitish Kumar had earlier questioned Yadav’s pledge and wondered about the funding of the jobs scheme, welcomed the BJP announcement.

“This announcement is based on facts and everything has been worked out. This is not an election stunt,” said spokesperson Ranjan.

The RJD called it a moral victory.

“It is nice to see BJP trying to resonate with Tejashwi Yadav’s promise for 10 lakh government jobs, but BJP’s announcement lacks the commitment. BJP manifesto says that it would create conditions for generation of 19 lakh jobs, while Tejashwi has clearly committed 10 lakh government t jobs, he has intentions to do so,” said Manoj Jha.