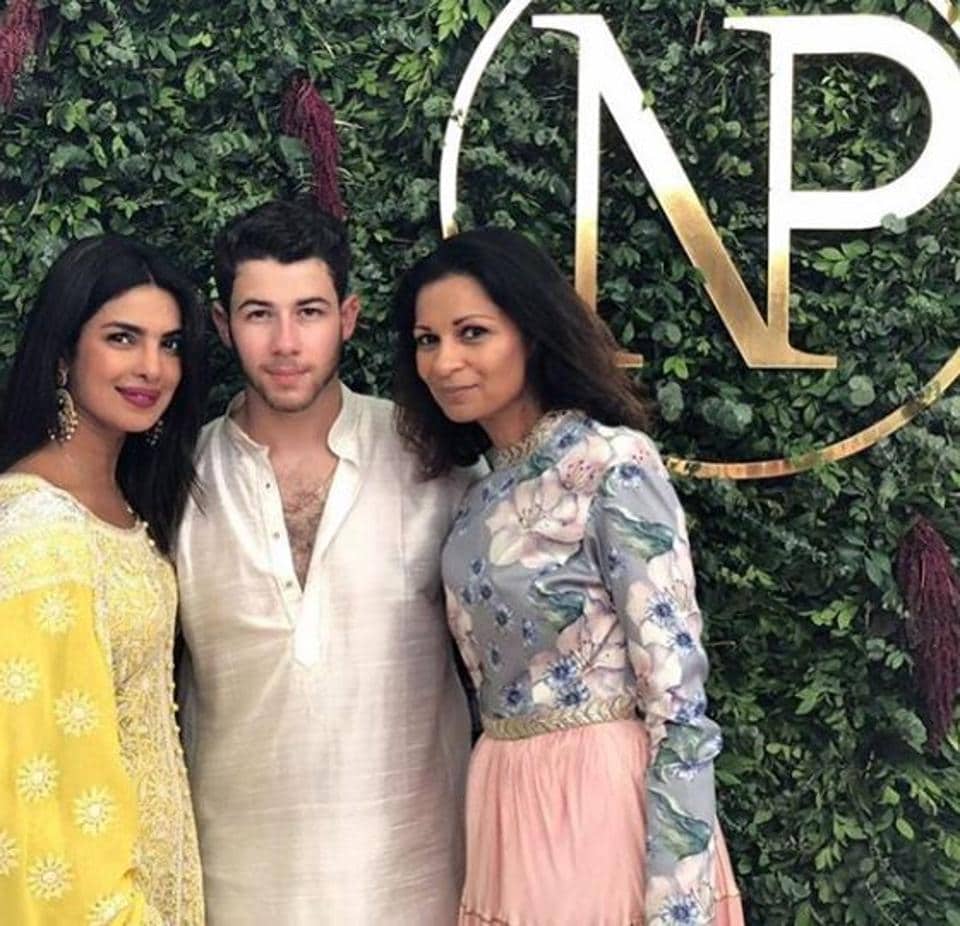 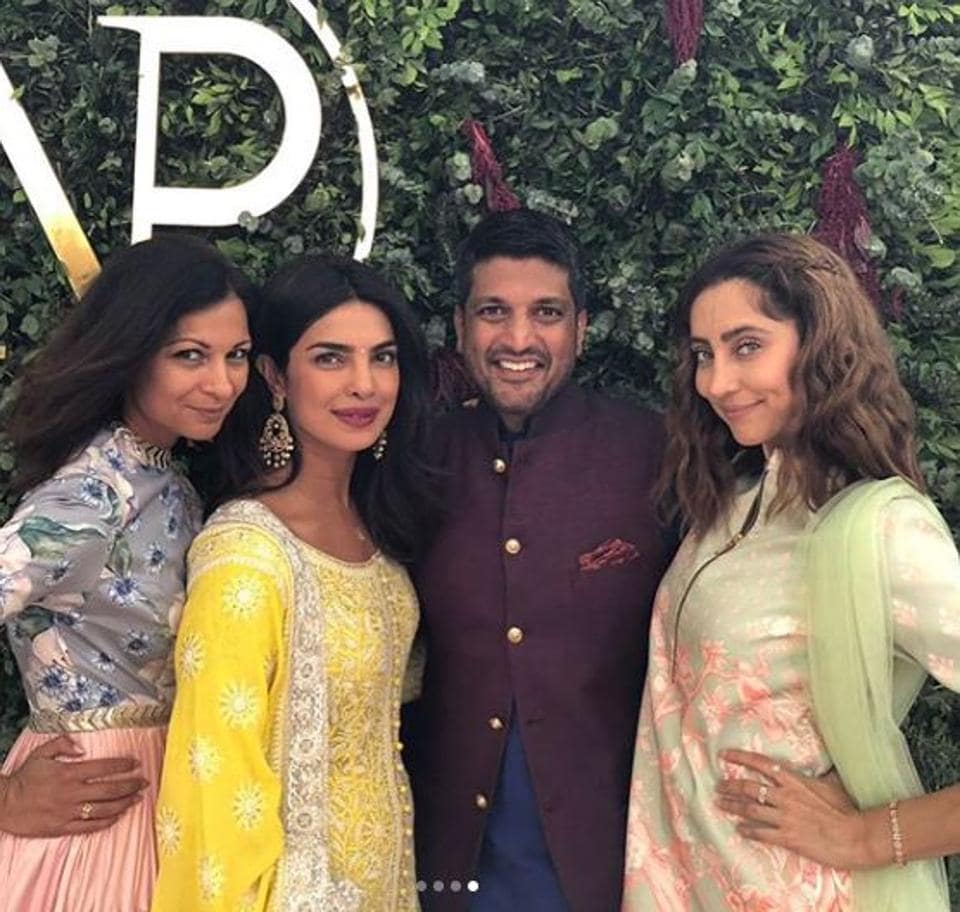 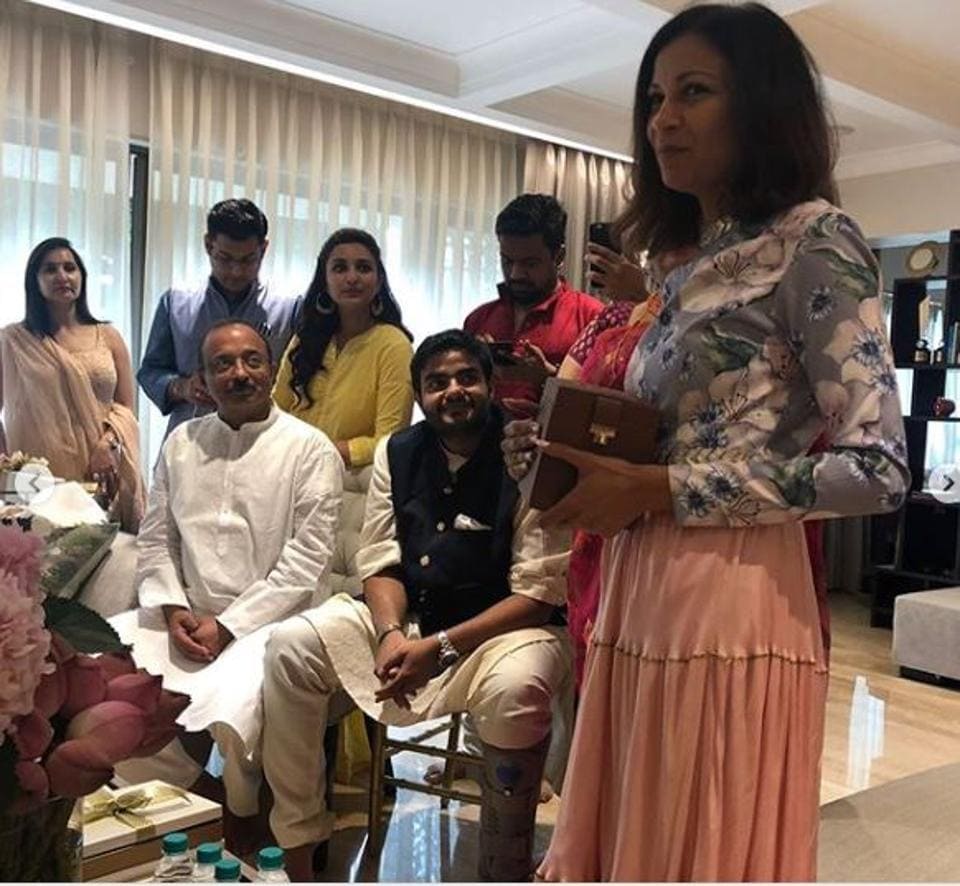 Parineeti Chopra among the guests at Priyanka Chopra’s engagement celebrations. 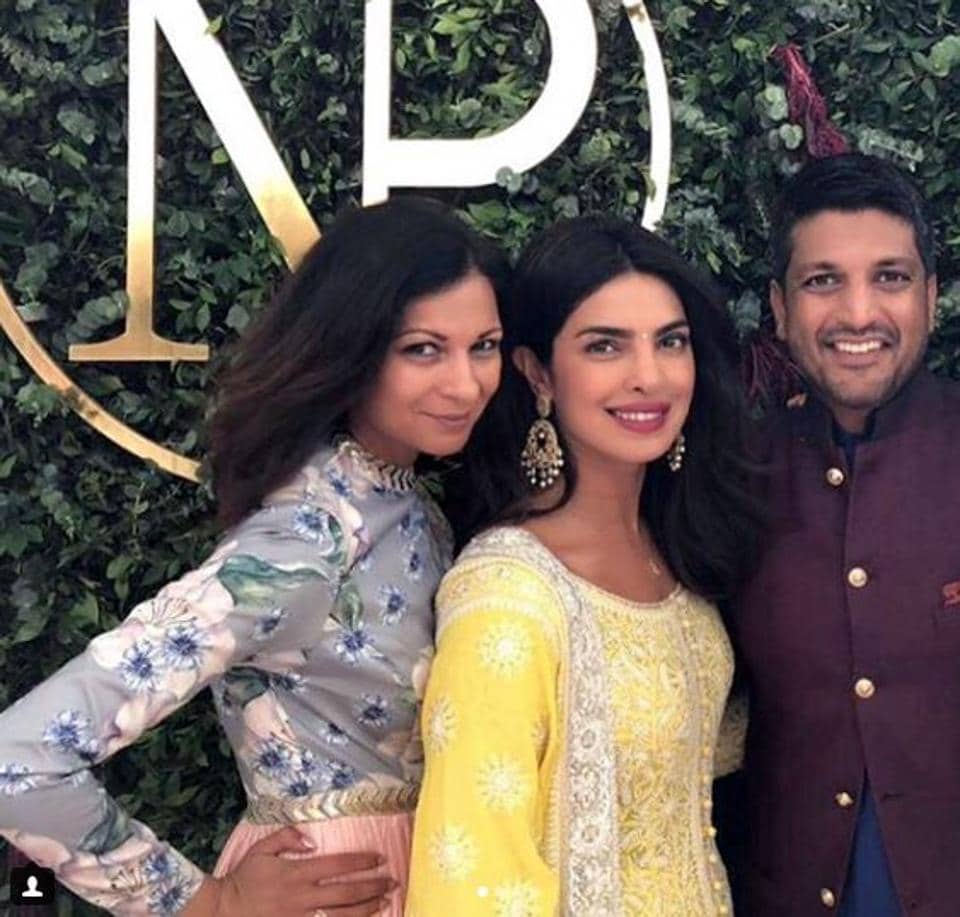 Arpita Khan Sharma, one of Priyanka Chopra’s closest friends, arrived for her engagement. Arpita arrived in a pretty pink suit to join her friend on her big day. The two are often seen together on dinner dates and Priyanka was one of the first people to pay Arpita a visit when her son, Aahil was born. The invitation also suggests that all is well between Priyanka and Salman after she quit his film Bharat merely 10 days before her portion of shoot was to begin. Read full story here. 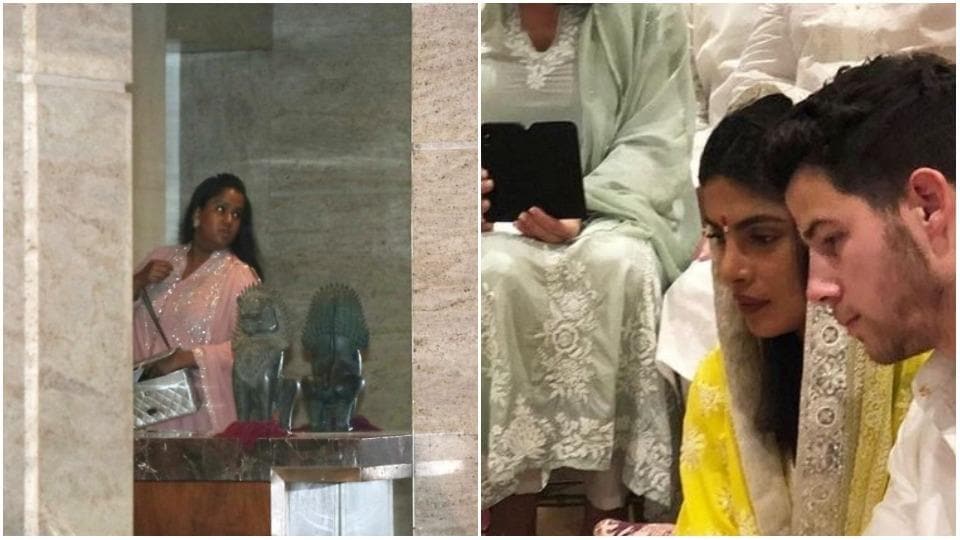 Priyanka Chopra and Nick Jonas’ Instagram confirmation of their engagement had Hollywood and Bollywood stars lining to congratulate them. The most special comment was from Nick’s dad who welcomed Priyanka to the family.

Both Priyanka Chopra and Nick Jonas took to social media to accept their relationship minutes after their roka. While Nick called Priyanka ‘future Mrs Jonas’, Priyanka wrote, “Taken.. With all my heart and soul..” They also shared a photo from engagement ceremony.

Taken.. With all my heart and soul.. 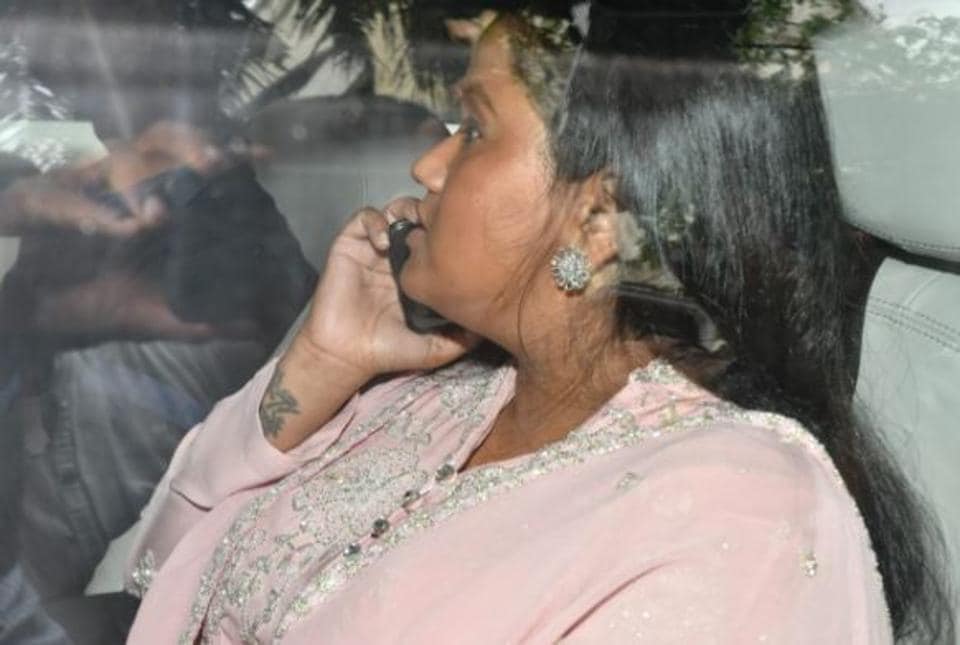 Preity Zinta took to Instagram to congratulate Nick Jonas, Priyanka Chopra on their engagement. “Congratulations to my dear PC & Nick on their new journey together. Wish you both loads of love, happiness & togetherness always,” she wrote.

Congratulations to my dear PC & Nick on their new journey together. Wish you both loads of love, happiness & togetherness always 😍 ting #PriyankaNickEngagement #Celebration ‬ @priyankachopra @nickjonas

Priyanka and Nick will hold an engagement bash in the evening with gold and white theme. Bollywood stars such as Karan Johar, Ranveer Singh and Raveena Tandon, among others, are expected to attend event.

Not just Priyanka Chopra and Nick Jonas, even his parents were seen wearing traditional Indian clothes at the couple’s engagement ceremony. While Nick’s father Kevin Sr was seen in a pristine white kurta-pyjama, mother Denise chose a beautiful green suit. They were seen sitting next to Nick and Priyanka during the roka ceremony. It was earlier reported that Nick’s family was very enthusiastic about Indian customs and rituals. 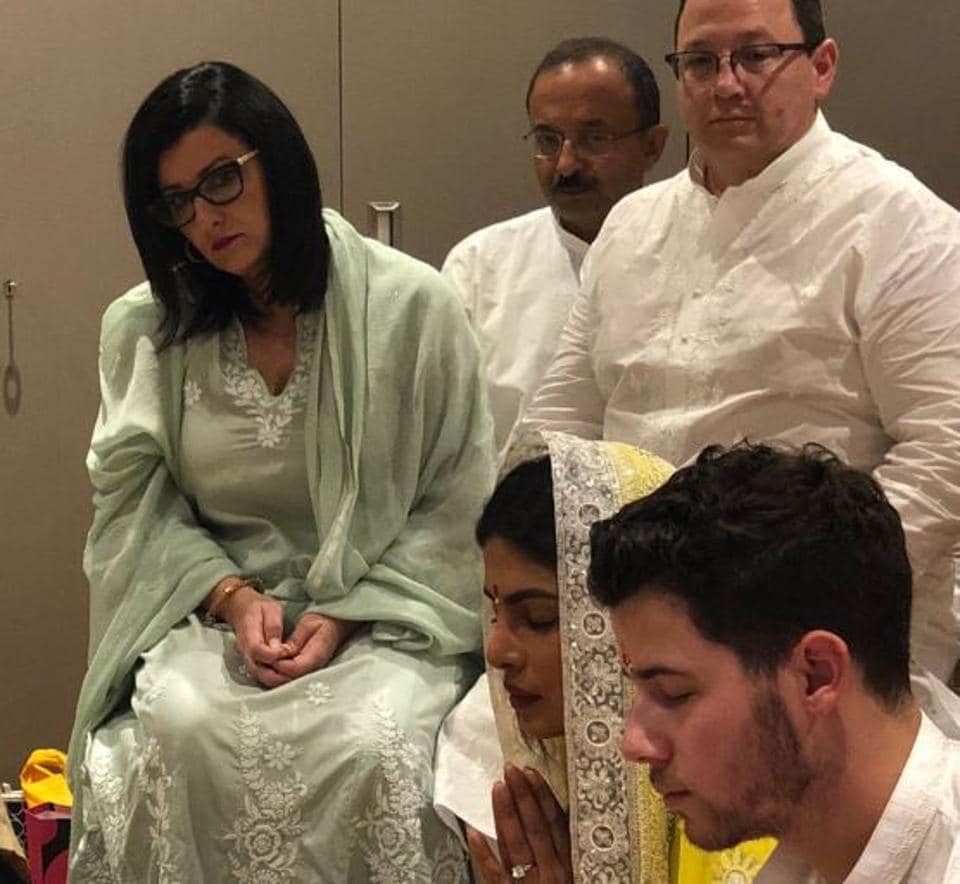 Nick Jonas and Priyanka Chopra at the roka ceremony with his parents. ( )
12:50pm IST

Priyanka Chopra and Nick Jonas -- dressed in their traditional best -- sat down for a traditional puja ceremony at Priyanka’s residence in Mumbai. The couple is getting engaged according to Indian rituals and the actor has invited close friends and family for the ceremony. While Priyanka was seen with her hand in Nick’s hands, the American singer looked serious as he tried to follow the rituals.

#priyankachopra and #nickjonas at the puja ceremony @viralbhayani

While Priyanka Chopra chose a yellow suit for her engagement ceremony, fiancee Nick Jonas also decided to go desi and wore an off-white kurta-pyajama. Despite all the security, a photo of the two with a giant NP, standing for Nick and Priyanka, went viral within minutes. Priyanka and Nick looked completely into each other as they smiled and talked during the traditional roka ceremony.

And here’s the first glimpse of the couple! @priyankachopra and @nickjonas at the Roka ceremony today. #PriyankaNickEngagement pic.twitter.com/2pCumxiKVj

Anjula Acharia, Priyanka Chopra’s close friend who also manages the Quantico star, has reached Mumbai for the evening engagement party. She shared a photo and wrote, “#readyornotherewecome #mumbai @maneeshkgoyal.” The celebrity manager belongs to Priyanka’s inner circle and her arrival in India confirms the importance Priyanka and Nick are giving to their engagement party in the evening.

Priyanka Chopra’s cousin and actor Parineeti Chopra took a break from her film’s shoot in Lucknow to attend the event. As Nick Jonas and Priyanka Chopra’s enagagement celebrations are being kept hush-hush, only a few knew the reason of Parineeti leaving the shoot location. Dressed in a yellow outfit, Parineeti was seen reaching Priyanka’s residence some time ago. The actor had earlier accompanied Priyanka and Nick when they had gone to Goa for a short vacation.

#parineetichopra arrives at #priyankachopra home for her engagement bash wih #nickjonas. The panditji arrived today at 8 am for the puja ceremony that will take place at her home in fee hours from now followed by celebrations. A lot of celebs are also expected to arrive @viralbhayani

Priyanka Chopra’s friends from the film industry started reaching for the traditional roka ceremony. Among those who were seen at her residence for the morning puja include scriptwriter Mushtaq Shaikh and producer Shrishti Behl. Priyanka and Shrishti worked together in Drona and have been the best of friends since.

A small puja is taking place at Priyanka Chopra’s residence in Mumbai as part of roka ceremony. Priyanka Chopra and Nick Jonas are making their engagement official in the presence of their respective families and close friends. The whole event is shrouded in secrecy with both Nick and Priyanka refusing to comment on their relationship. Close friends of Priyanka have reached the residence, with Priyanka’s cousin Parineeti Chopra among the first few there. 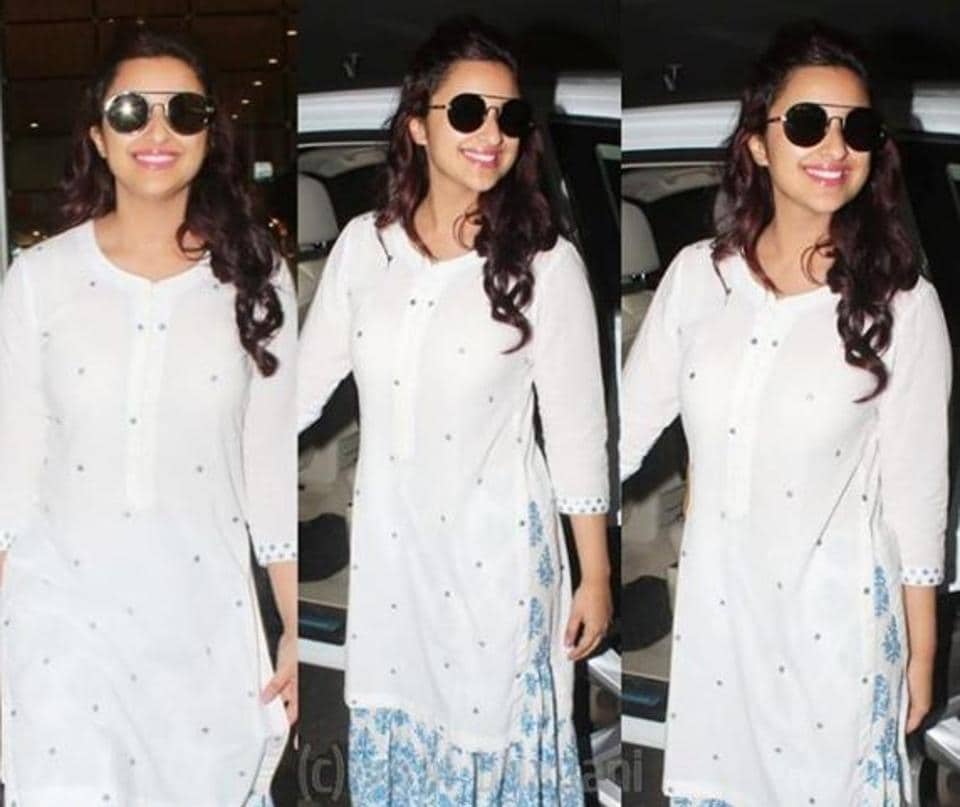