Priyanka Chopra is back in Mumbai to attend the wedding of her brother Siddharth Chopra. Siddharth will tie the know with fiance Ishita Kumar at the end of this month.
Share Via
Copy Link
Hindustan Times, New Delhi | ByHT Correspondent

Actor Priyanka Chopra has arrived in Mumbai for the wedding of her brother Siddharth Chopra. According to a report in SpotBoye, Siddharth will tie the know with fiance Ishita Kumar at the end of this month followed by a wedding reception on April 30.

Priyanka was spotted at the Mumbai airport by the paparazzi on Wednesday afternoon. She was seen in a lemon green shirt and pants, her hair tied up and dark sunglasses on her eyes. She smiled for the cameras as she spotted the media.

She even shared a picture from her flight on Tuesday night. ‘Plane=sleep,’ she wrote with the picture as she took a nap in her seat, but not without clicking a selfie first. The picture also showed her wearing her mangalsutra.

Siddharth and Ishita’s got engaged in February this year. Priyanka also shared pictures of her sister-in-law on Instagram from the roka ceremony. “So proud of my baby brother. Ishita welcome to the family...you are so beautiful together...I wish you both the best for the future! Happy Roka!,” she captioned a bunch of pictures from the ceremony. 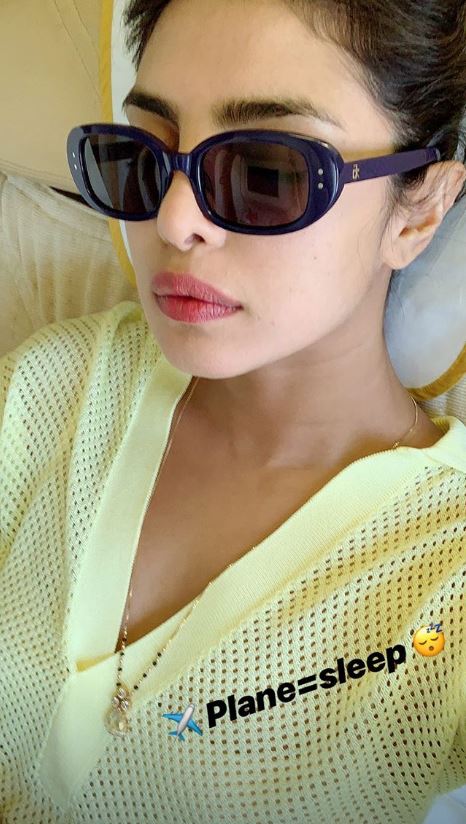 Priyanka was joined by her husband and American singer Nick Jonas at the roka ceremony. He has not arrived with her to India yet but is expected to join the family for the wedding. Nick talked about being a part of Sidharth’s roka on The Late Late Show with James Corden. “So my brother-in-law is getting married. So we went back together. I was there for a day as I was in New York to announce this whole thing. But we went for the roka ceremony which is basically when two families come together and decide if they are going to approve of their union or not. And so they meet and get to know each other,” he had said.

“So Priyanka is older than her brother and although he is just 3-4 years older than me, given that she is the senior in the family to him, she had a big important role to approve of the union and by way of being married to her, I also did. So I really milked it. I was like ‘I’m not sure’,” he had said.