Bollywood stars Shah Rukh Khan, Anushka Sharma and Katrina Kaif shared the trailer for their next big movie of the year, Zero. The film’s trailer was revealed at a launch event in Mumbai on Friday, which also marks Shah Rukh Khan’s birthday. 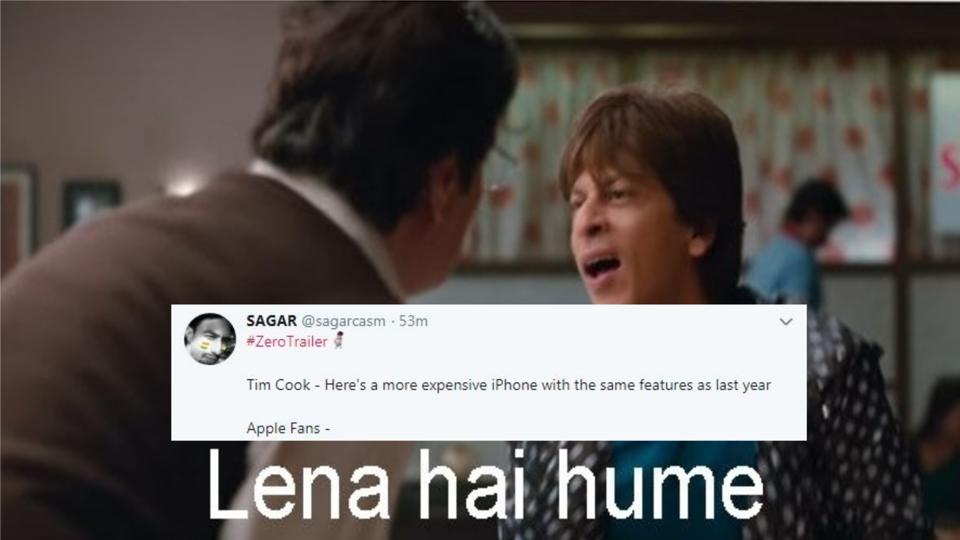 Alia Bhatt was all praises for the Zero trailer. She wrote in a tweet that she can’t wait to watch the film.

This is so so special ❤️💫 you guys are just magical! @AnushkaSharma #KatrinaKaif 🌟🌟🌟👊 Can’t wait to see this one!!! #ZEROTRAILER https://t.co/Z0iA4e0p93

“My love to @deepikapadukone.. god bless them happiness and goodness to them. I called Deepika the other day and said be as happy as I have been in my married life. Lots of love to them,” SRK said about Deepika Padukone’s upcoming wedding to Ranveer Singh.

“If I say anything against Indian cricket team, I will get a snap from the girl sitting beside me, she is Mrs Cricketer,” SRK said about Anushka and her cricketer husband Virat Kohli.

“Technology should be there in everything, if technology is available then it can enhance the visionary of the director,” Shah Rukh said about the film.

Anushka Sharma shared a special picture with Shah Rukh on his birthday.

Happy happy happiessstt to the most amazing & charismatic actor I’ve had the pleasure of working with! Hope you continue to dazzle and inspire us with your drive and passion for years to come💝💫 @iamsrk pic.twitter.com/ep5LLc3bFj

SRK reaches for the moon in Zero trailer, literally

Katrina Kaif says she learnt a lot from Zero

“As an actor and a performer, I learnt a lot from this film,” Katrina Kaif said at the trailer launch.

Shah Rukh says he always feels like a loser

“I feel like a loser always,” Shah Rukh said when asked about the last time he felt like a ‘zero’.

Shah Rukh said at the launch event, “This film is about a girl with cerebral palsy and a girl who is emotionally incomplete.”

The trailer for Zero is out.

Shah Rukh Khan, Anushka Sharma and Katrina Kaif have arrived at the venue for trailer launch.

Director Aanand L Rai has arrived at the trailer launch venue. He says he is excited to share the trailer.

Television star shared a picture of him and his mother with Shah Rukh on the sets of his show The Kapil Sharma Show. He wished him on his birthday.

Fans get impatient for trailer

Shah Rukh’s fans are tweeting jokes and gifs to convey their frustration about the trailer getting delayed. It was supposed to launch at 3pm.

Shah Rukh waves to his fans

Shah Rukh Khan is still at his house, Mannat. He stepped out to his balcony to wave to his fans. His son AbRam was also by his side.

Farhan Akhtar shared a throwback picture with Shah Rukh to wish him on his birthday.

Happy birthday @iamsrk .. may this year be the biggest and best one yet .. big hug

Katrina shared new poster for Zero and captioned it, “Happiest happiest birthday @iamsrk. Your intellect wisdom and passion make working with you always such an incredible experience. Here’s the best year the best film and more.”

Pics from trailer launch venue out

The trailer launch venue for Zero features colourful props, huge posters, chuski and golgappa stalls. The vibe and feel of Meerut has been recreated.

Straight from the venue of #ZeroTrailer ...it's gonna be an EVENT of a unique kind pic.twitter.com/HZGoMNIPsb

Aamir wishes SRK on his birthday

Aamir Khan shared a picture with Shah Rukh Khan to wish him on his birthday.

Karan wrote in his tweet that Zero trailer has “blockbuster written all over it.”

The trailer of #ZERO has BLOCKBUSTER written all over!!!! The fantastic @iamsrk in the most endearing character of his career! The always brilliant and soulful @AnushkaSharma and watch out for the intro shot of #KatrinaKaif and her impact in the trailer!!! This ones a whopper! ❤️

Film’s director Aanand L Rai has shared a new poster ahead of the trailer launch. He also wished Shah Rukh on his birthday.