The chief minister said Delhi “cannot to afford” to let its “guard down” even though the number of cases and the test-positivity rate -- an indication of the spread of an outbreak within an area -- has seen a declining trend over the last few days.
Share Via
Copy Link
By Abhishek Dey, Hindustan Times, New Delhi

Delhi chief minister Arvind Kejriwal on Sunday extended the lockdown in Delhi by another week, but said restrictions will be scaled up, with Metro rail services completely suspended for seven days and wedding ceremonies banned in public areas in an effort to control the spurt of Covid-19 cases as the city battles its deadliest wave of infections so far.

The chief minister said Delhi “cannot to afford” to let its “guard down” even though the number of cases and the test-positivity rate -- an indication of the spread of an outbreak within an area -- has seen a declining trend over the last few days. 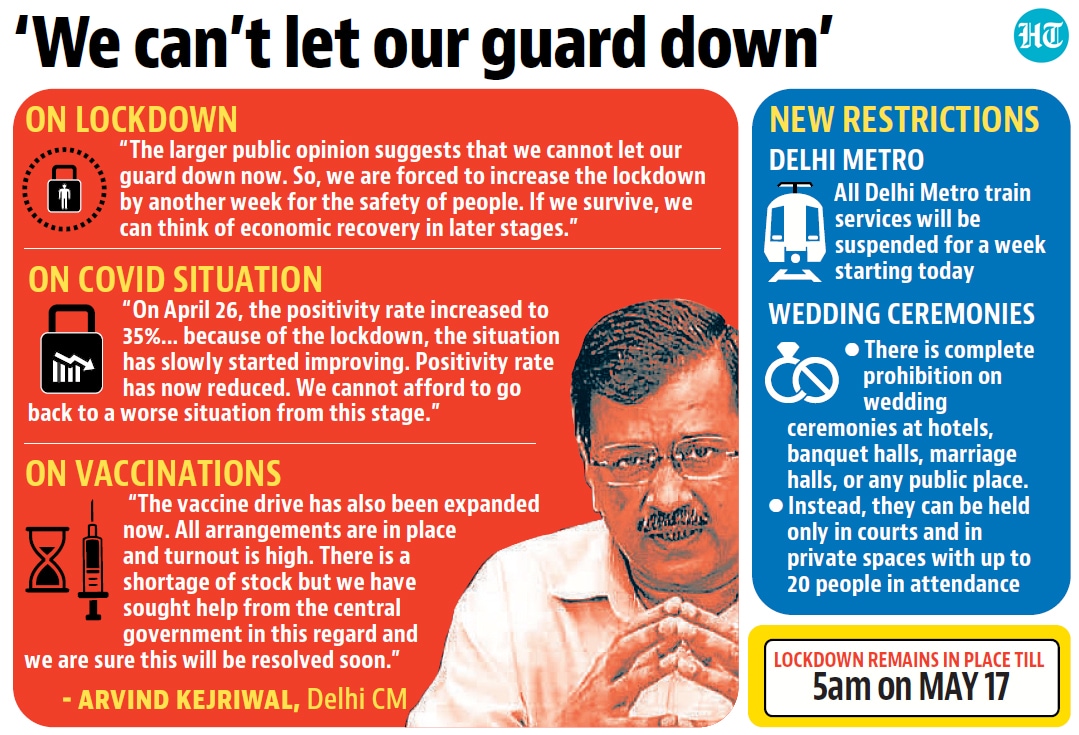 “We spoke with large sections of people – men, women, youngsters, traders, etc. The larger public opinion suggests that we cannot let our guard down now. So, we are forced to increase the lockdown by another week for the safety of people. If we survive, we can think of economic recovery in later stages. The current lockdown was supposed to end at 5am tomorrow, (Monday). Now it has been extended till 5am next Monday,” Kejriwal said at an online press briefing on Sunday.

He added that the “enforcement of the lockdown” will be stepped up and operations of the Delhi Metro -- which had been available for people engaged in providing essential services until now -- will be “completely shut down”.

“We must remember jaan hai toh jahan hai... this time the lockdown will be stricter,” he said.

Later in the day, an order issued by the Delhi Disaster Management Authority (DDMA), which is chaired by lieutenant governor Anil Baijal, said: “Delhi metro services shall not function during curfew.”

The order also prohibited any wedding ceremony at hotels, banquet halls, marriage halls or public spaces. Instead, such events can only be held in courts and in private spaces with a maximum gathering of 20 people, the DDMA order -- a copy of which has been reviewed by HT -- said.

Also read | No metro, 20 people in weddings: Delhi to see stricter lockdown till May 17

With Sunday’s announcement, Delhi has extended its lockdown for the third consecutive time, although this is the first instance of restrictions being tightened in this wave. The new restrictions will remain in place till 5am on May 17.

Under the ongoing lockdown that was first imposed on April 20, when the city was well into its fourth wave of infections, a curfew was imposed except for specific activities (such as going to buy groceries and medicines, or for going to a hospital or airports/railway stations) but all essential services like food and medicine shops were allowed to operate.

Weddings were previously allowed in banquet halls and hotels, but the gatherings were limited to 50 guests. Metro services were previously open for people engaged in essential activities and were running with 50% seating capacity.

Kejriwal also said on Sunday the extension of the lockdown was necessary to further augment Delhi’s public health infrastructure as the city’s latest surge in Covid-19 cases inundated medical facilities and triggered an acute shortage of life-saving supplies such as oxygen and drugs.

“On April 20, we were forced to impose a lockdown because of an unprecedented increase in Covid-19 cases. We were also running out of beds, ICUs, etc. On April 26, the positivity rate increased to 35%. After April 26, because of the lockdown, the situation slowly started improving. Positivity rate has now reduced to 23%... We cannot afford to go back to a worse situation from this stage. The situation has to be further controlled,” the chief minister said.

On Sunday, Delhi added 13,336 new cases (fewer than its daily average of 19,383 for the previous seven days on account of low level of testing on weekends) and 273 deaths.

The test-positivity rate -- which refers to the proportion of samples tested for Covid-19 returning positive -- also dropped to 21.67%, the lowest in 23 days, data from the government’s daily health bulletin issued on Sunday showed.

Despite indicators of the situation easing, there are still 86,232 active cases in the city and a majority of hospital beds occupied. Of the total 22,545 beds across the Capital, 19,912 are occupied and 2,633 vacant.

“We used the lockdown period to strengthen health infrastructure. Oxygen beds were added. We need to continue doing that. We also faced a severe shortage of oxygen because of the high number of cases and high proportion of severe cases compared to the past three waves. Now the oxygen situation has slightly improved with the interference of the Supreme Court and the Delhi high court, and cooperation of the central government,” the chief minister said.

Burdened by the massive caseload, hospitals across the national capital sent out several distress calls, resorting even to making appeals on social media websites, as their stocks of medical oxygen dwindled rapidly from the third week of April.

Police authorities will ensure effective checking of persons and vehicles on roads by putting an adequate number of pickets, the DDMA order said. “Delhi Police will also ensure that movement of individuals and vehicles should be allowed strictly as per the guidelines/protocols prescribed in the curfew order,” it added.

Praveen Khandelwal, national secretary-general of the Confederation of All India Traders (CAIT), said: “There is huge movement of people without any checking. Not only shops but all kinds of activities, except essential commodities, should remain locked down. All the borders of Delhi should be equipped with strict checking of individuals and vehicles. Strict vigilance is required at airports, railway stations, bus terminals, etc.”

Brijesh Goyal, chairman of the Chamber of Trade and Industry and an Aam Aadmi Party leader, said: “We did a survey of 480 traders across the city and 65% of them were in favour of increasing the lockdown for another week. Large number of traders have assured that they will adhere to all regulations concerning the lockdown.”

Banquet hall owners, however, said their businesses will take an even bigger hit. “We were told that the curfew was temporary. Both the chief minister and LG had requested people to not leave the city. Our staff that had stayed back has nowhere to go now. Our earnings have come to a halt and with so much uncertainty, we are not sure if we can continue to pay their salaries anymore,” said Ramesh Dang, president of the Community Welfare Banquet Association Delhi.

Greesh Bindra, vice-president, operations, The Suryaa, also said that the hotel will push for the deferment of wedding ceremonies. “We will not refund the money but give an option to the customer so that they can come back to us once the curfew is over. The advance amount paid for blocking the date is never refundable,” he said.

Kejriwal spoke of the city’s vaccination drive on Sunday and again appealed the Centre to provide more doses to the Delhi government. “The vaccine drive has also been expanded now. All arrangements are in place and turnout is high. There is a shortage of stock but we have sought help from the central government in this regard and we are sure this will be resolved soon,” he said.

“The situation in Delhi is not under control yet. Patients are not getting hospital beds, ICUs, ventilators, oxygen, medicines, etc. Even though the Covid-19 numbers and positivity rate are going down, as per the government’s health bulletins, it is too early to draw conclusions. Delhi needs more time to bring the situation under control. It is extremely necessary to minimise gatherings, crowds and the possibility of large number of people in any space. The lockdown is an important step in that regard,” said Dr Lalit Kant, former head of the epidemiology at the Indian Council of Medical Research.

(With inputs from Sadia Akhtar in New Delhi)