Prior to the construction of the right marginal and left marginal embankments, the river used to inundate the trans-Yamuna areas and other parts nearly every year.

Every time Bhaskara Nand Dimri (77) reads news reports about the Yamuna’s rising water level, his mind is inundated with myriad scary thoughts of the 1978 flood the Capital experienced 40 years ago.

Dimri, a resident of Model Town, an upscale neighbourhood in north Delhi, had to spend a sleepless night at a bus terminal at Azadpur before he could join his family members. They had relocated to the Hindu Rao hospital’s staff quarters situated on a hillock in the northern ridge.

“The flood water first entered Jahangirpuri and then started spreading to other locations. Soon, the administration began evacuating residents from lowlying areas. As a precautionary measure, I had sent my family to a relative’s place working in Hindu Rao hospital. Soon, Azadpur and Model Town were under five-feet water,” said Dimri, a retired government teacher.

The intensity of the water and breaches in embankments submerged 43 square kilometres (sqkm) of agricultural land, mostly in outer Delhi, under two metres of water. The surge destroyed the kharif crop, caused extensive damage to properties and displaced lakhs of residents. 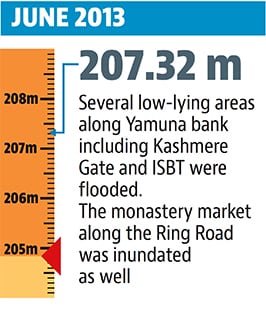 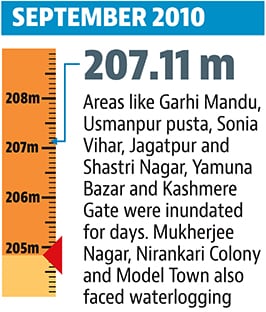 It was not the first time that the city was deluged. But it was worst-ever flood Delhi had witnessed. At that time, the river was flowing 2.66 metres above the danger mark at the Purana Pul (old railway bridge). The level touched the 207.49-metre mark, which still remains unbeatable.

The danger mark (207.73 metres) was set according to the height of the old rail bridge over the Yamuna, which opened in 1866-67. The embankments that existed back then were good to hold only low-intensity flooding.

“Work on embankments that stand today started around the 1960-70s. When the 1978 floods struck, they were still not strengthened. Water entered several low-lying areas through breaches at locations,” said Omesh Saigal, former chief secretary of Delhi who held the charge of secretary, planning, in the Delhi administration in 1977-78.

Prior to the construction of the right marginal and left marginal embankments, the river used to inundate the trans-Yamuna areas and other parts nearly every year. The flooding of the monastery market along Ring Road near Kashmere Gate was a signal that river water was on the verge of entering the city.

Diwan Singh, an environmentalist, said the other reason for the city’s inundation in 1978 was unprecedented rainfall in Delhi and Yamuna’s catchment areas. “The city lacked a robust drainage. At present, the city doesn’t get rainfall of that force. Water in Yamuna majorly is due to downpour in the hills,” Singh said.

Now, the embankments on both sides of the river are complemented by about 20 shanks (concrete structures) and 10 bunds. Bunds along the length of the Yamuna prevent flooding in Delhi after water from the Hathnikund in Haryana is released.

To make the city more safe, the height of the embankments has been increased since 1978, said an official of the irrigation and flood control department, who has been part of the team supervising flood-control measures during three flood-like situations.

“Now, when the Yamuna is in spate, the low-lying colonies, which are actually built on the floodplains, are flooded. The Monastery market also gets submerged or maximum, water enters Ring Road, as it happened in 2010 and 2013, due to backflow of water,” he said.

“These shanks are located at strategic points where the river changes its course. A repeat of the 1978 flood is unlikely because embankments and shanks guard the city. Now we have better coordination among agencies. We have a regulator at Hathnikund, where water is released in controlled manner,” the official said.

“As an emergency measure, excess water is diverted to sewers, which goes to sewage treatment plants (STP). Major drains can be closed to prevent backflow of water,” said Negi.