The incident followed the lack of forward movement in the disengagement and de-escalation process even after several rounds of diplomatic and military talks.

India said on Monday that it had pre-empted “provocative military movements” by China to change the status quo along the Line of Actual Control (LAC) on the southern bank of Pangong Lake, a development that widened the trust deficit between the two sides and dealt a blow to efforts to reduce tensions.

The incident followed the lack of forward movement in the disengagement and de-escalation process even after several rounds of diplomatic and military talks. India has insisted that China should deliver on agreed actions for redeploying troops towards their regular posts along the LAC. China has been obdurate about this. 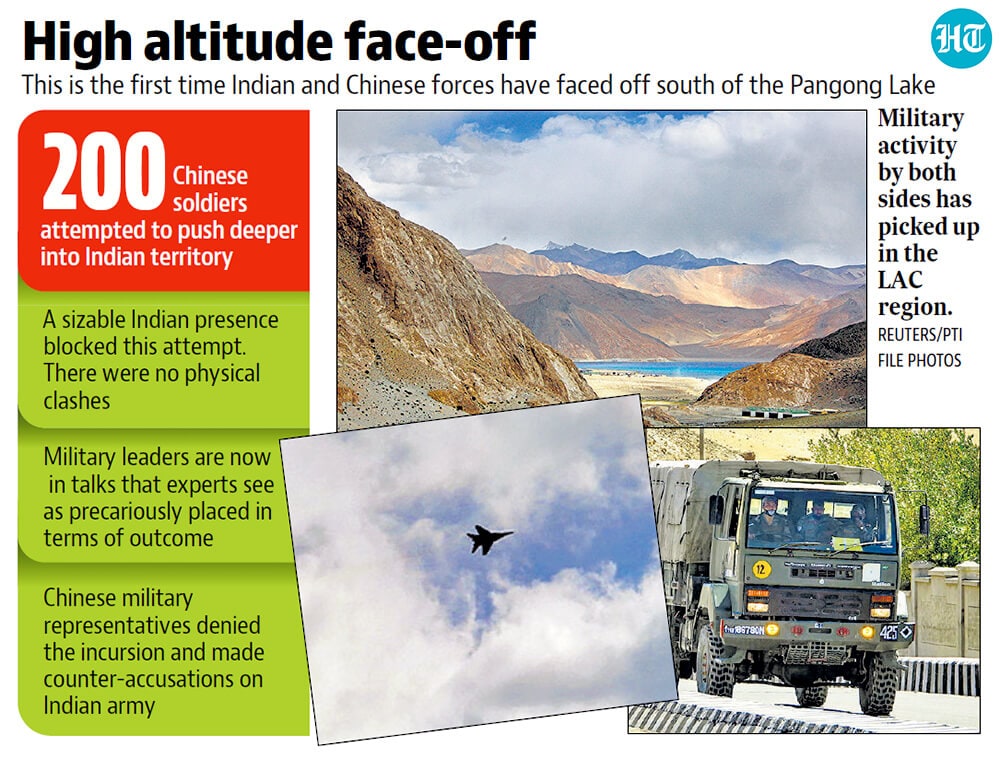 People’s Liberation Army (PLA) troops violated the consensus reached during military and diplomatic engagements and “carried out provocative military movements to change the status quo” on the night of August 29-30, Indian Army spokesperson Col Aman Anand said in a statement.

“Indian troops pre-empted this PLA activity on the southern bank of Pangong Lake, undertook measures to strengthen our positions and thwart Chinese intentions to unilaterally change facts on ground,” he said, without elaborating on the nature of the Chinese provocation and how Indian soldiers blocked PLA’s actions.

More than 200 Chinese soldiers were involved in the attempt to occupy Indian territory on the lake’s southern bank but sufficient number of Indian troops — armed with accurate intelligence about PLA movements in the sector — were able to thwart the threat, officials familiar with the developments said on condition of anonymity.

The confrontation didn’t escalate into a physical clash, they said. Until now, tensions in this sector were confined to the Finger Area on Pangong Lake’s northern bank.

The movement of Chinese troops from their base towards Indian territory on the lake’s southern bank was detected at around midnight on August 29, said one of the officials cited above. Indian troops at forward positions on the LAC have been in the highest state of alert since tensions erupted in early May to deal with any adventurism by PLA.

“Inputs provided by intelligence, surveillance and reconnaissance platforms made it clear the Chinese troops were on their way to occupy strategic heights on our side of the LAC. We had no doubts about their intention and were fully prepared,” said a second official.

As soon as the Chinese movement was detected, Indian commanders ordered their troops to deploy to the heights from where the Chinese soldiers were planning to make ingress into Indian territory.

“We took the heights before the Chinese could reach them. Our presence there pre-empted the PLA from coming in. China is now claiming the heights are on their side of the LAC. We are still holding those heights, which are on our side of the LAC,” the first official said.

The multiple heights that the army is now holding on the lake’s southern bank will allow the army to dominate the area, officials said. Senior colonel Zhang Shuili, spokesperson of China’s western theatre command, claimed in a statement that the Indian Army “broke the consensus” reached at talks and “illegally crossed the line again near the south bank of Pangong Lake and Reqin Pass, making a blatant provocation and causing tension”.

The Indian move “violates China’s territorial sovereignty, seriously undermines peace and stability” in border areas, he said in the statement issued in Mandarin. “We solemnly request the Indian side to immediately withdraw its illegal occupation and control forces, strictly control and restrain its frontline troops, earnestly abide by its commitments and avoid further escalation of the situation,” he added.

In Beijing, foreign ministry spokesperson Zhao Lijian told a news briefing: “Chinese border troops always strictly abide by the LAC. They never cross the line. Border troops on the two sides have been in close communication regarding the issues on the ground.”

A flag meeting of brigade commanders was held at Chushul to resolve the issue but its outcome was not immediately known.

“The Indian Army is committed to maintaining peace and tranquillity through dialogue, but is also equally determined to protect its territorial integrity,” Col Anand said.

People familiar with developments said PLA’s latest action amounted to a serious transgression, especially in light of India’s repeated assertions that there should be no attempts to unilaterally alter the status quo along the LAC while the two countries worked on disengagement.

“Our side was prepared and took care of things, but this is a serious development,” said one of the people cited above.

Experts said the military and diplomatic talks or economic measures against China haven’t led to any change in PLA’s behaviour in the Ladakh sector.

Vipin Narang, associate professor of political science at the Massachusetts Institute of Technology, said: “[This is] the new normal. The good news is Indian forces seem to be able to stop the bleeding with a deterrent force and manoeuvres. The bad news is the Chinese are still there and show no signs of leaving, and India still has few good options to reverse the initial faits accomplis.

“The fact that China attempted to keep poking suggests that their long-term strategy may, in fact, be to force India to commit a large number of forces to the LAC to defend large swathes of land at all times, at great cost to the Indian Army.”

But Hu Xijin, editor of state-run Global Times, contended on Twitter that Indian troops had “again pulled a stunt at [the] border” while thinking “China will make concessions to provocative actions”. He added, “Don’t misjudge the situation anymore. If there is a conflict in Pangong Lake, it will only end in new defeat of Indian Army.”

In another tweet, he said, “The south bank of Pangong Lake is under actual control of China. In 1962, the Chinese army beat the Indian Army there. This time it is the Indian Army that tried to break the status quo. I hope India will not make the same mistake.”

In an interview to HT, chief of defence staff Gen Bipin Rawat said earlier this month that a military option to deal with PLA’s transgressions was on the table, but it would be exercised only if diplomatic and military talks were unproductive.

The gap between the situation all along the LAC and a skirmish confined to Ladakh sector appears to be closing, said former Northern Army commander Lt Gen (retired) BS Jaswal. “We need to stay prepared for an intense skirmish that could lead to a limited war. China’s actions are a part of its strategy to retain escalation dominance,” he said.

Former army vice chief Lt Gen (retired) AS Lamba said: “China’s intention to escalate the situation from denial to confrontation to attempting to change the status quo is unmissable.”

While the army can work for peace on the border, a military option — as mentioned by Gen Rawat — may emerge as the plausible new strategy to guide future posturing in the Ladakh sector, Lamba said.

The sizeable Chinese troop presence at friction points, particularly Pangong Lake and Depsang, remains an area of key concern for the Indian Army. The Finger Area — a set of eight cliffs jutting out of Sirijap range overlooking Pangong — has emerged as the hardest part of the disengagement process.

Disengagement has progressed somewhat smoothly at friction points in Galwan Valley and Hot Springs, but its pace remains sluggish in Gogra area.

The overall ground situation remains unchanged in the Ladakh sector, where both armies have deployed almost 100,000 soldiers and weaponry in their forward and depth areas. Last week, India pulled out of a multilateral military exercise being hosted next month by Russia in which around 20 countries, including China, are expected to take part.