Lok Sabha election 2019: The gains for BJP were not uniform across all states after the Kargil war

To disentangle the impact of military action against Pakistan on voters, it is useful to look at the 1999 national election.

On February 14, a suicide bomber killed 40 Central Reserve Police Force (CRPF) troopers in Pulwama in the deadliest attack on security forces in Kashmir since 1989. The Pakistan-based terrorist group, Jaish-e-Mohammed (JeM), claimed responsibility for the attack. In response, India launched air strikes on a JeM terrorist camp deep inside Pakistan on February 26. While the actual details of the air strikes, and the Pakistan military’s subsequent response, haven’t been disclosed, Prime Minister Narendra Modi received wide praise in India for a decisive response to the terror attack.

This couldn’t have come at a better time for the government — with a national election around the corner and the ruling Bharatiya Janata Party (BJP) getting hammered by the Opposition for its failure to create enough jobs and for alleged wrongdoing in the Rafale fighter jet deal. In the aftermath of the air strikes,political pundits have ranked the BJP as the front runner in the upcoming general elections. But what do we really know about how military action against Pakistan affects voters?

Based on survey evidence, Devesh Kapur has argued that the impact of Indian foreign policy on voter preferences is typically limited to a small group of elite. But Pakistan is different. It ties into a narrative of Hindu-Muslim enmity and vivid memories of previous wars and Partition. Indeed, Vipin Narang and Paul Staniland have documented how from India’s first prime minister Jawaharlal Nehru onwards, leaders have dealt with Pakistan in ways to keep the domestic audience happy — in particular, to avoid being seen as weak on Pakistan to prevent negative electoral consequences.

Who is most likely to be swayed to vote for the BJP based on military action against Pakistan? One hypothesis is that the electoral impact will be greatest in areas where the BJP is more active, as these are areas that are more ideologically aligned to the BJP and where the party cadre can campaign and mobilize support around anti-Pakistan sentiment. A second hypothesis is that the impact is strongest where voters have more national (and less regional) preferences. In particular, the gains for the BJP should be the greatest in direct competition with the other major national party, Congress. Where voters are mobilized around regional concerns, i.e., where the BJP must compete against a regional party, the effects of military action against Pakistan should be more muted.

To disentangle the impact of military action against Pakistan on voters, it is useful to look at the 1999 national election. In 1998, the BJP and then prime minister Atal Bihari Vajpayee came to power at the head of a shaky coalition. By July 1999, Indian forces had scored a decisive victory over Pakistan in the Kargil war. Elections came soon after (and because the shaky coalition saw the exit of a large partner, the All India Anna Dravida Munnetra Kazhagam) and they returned the BJP to power in a more stable coalition that would last a full five years (ending a period of instability in which India saw three national elections in three years).

In 1999, the BJP formed a broader electoral coalition, contesting 339 seats as opposed to the 388 seats it contested in 1998. The BJP’s average vote share (in seats that it contested) rose from 36% in 1998 to 40% in 1999, suggesting a significant but modest impact of the Kargil war (and also of the BJP’s governance between 1998 and 1999). When we restrict the data to the 331 parliamentary constituencies the BJP contested in both 1998 and 1999, we see a very strong relationship between the BJP’s 1998 vote share and BJP’s 1999 vote share (see chart 1). This suggests that the Kargil war was not a “game-changer” for the BJP — as vote share remained stable at the constituency level and was largely driven by constituency-level factors.

In order to see whether gains were driven by the BJP’s presence, chart 2 looks at the difference in average constituency-wise vote share between 1998 and 1999 for the BJP across the seven states in which the BJP contested at least 15 seats — Bihar, Gujarat, Karnataka, Maharashtra, Madhya Pradesh, Rajasthan, and Uttar Pradesh. There is no real discernible pattern, with the BJP gaining 7.4 percentage points in Rajasthan while losing 7.3 percentage points in Uttar Pradesh. In fact, the BJP lost vote share in three states — Karnataka, Maharashtra, and Uttar Pradesh — where it was up against strong regional parties. Indeed, the BJP gained the most vote share in places it competed against the Congress (see chart 3). In head-to-head contests against the Congress (where both the BJP and Congress finished first or second), the BJP saw a significant increase in vote share — from 44% in 1998 to 48% in 1999. By contrast, the BJP actually lost vote share in direct competition against other (regional) parties — from 40% in 1998 to 36% in 1999. This effect was largely driven by its performance in Uttar Pradesh, where the BJP’s seat share dropped from 57 in 1998 to 29 in 1999. 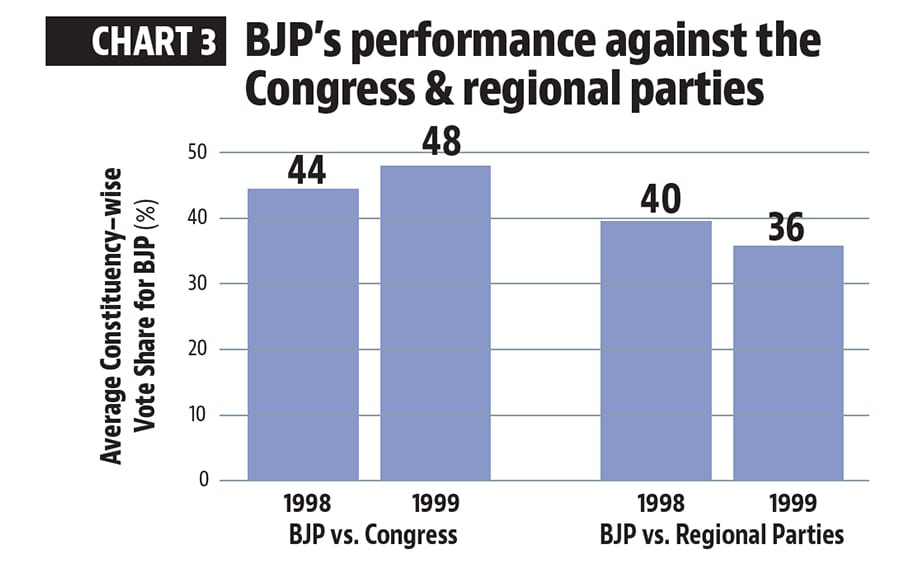 But times are different. The BJP contests far more seats nationally than it did in those days (it contested 428 seats in 2014), so there may be more impact nationally of a strike against the JeM in Pakistan. Or perhaps voters have fewer regional preferences than they did in the 1990s. On the other hand, the Kargil war was a more decisive victory and the BJP was not facing the same concerns over the economy that it is today.

Nonetheless, this data is instructive. As this writer has argued in the past, the BJP will need a commanding performance in states in which it battles head-to-head against the Congress, and the post-Pulwama response may provide the fillip the BJP needs. But the Congress is a far weaker party than it was in the late 1990s, and the BJP will likely have to perform well against regional parties as well — where the electoral effect of military action against Pakistan may be less pronounced. For all the tall claims made by political pundits, the data suggest that military action in Pakistan won’t be a game-changer in this election.