Actor Ranveer Singh has found himself a forever cheerleader in wife Deepika Padukone. The star shared a sweet video of Deepika on Friday, in which she can be seen singing a song from his latest film, Simmba.

She softly sings ‘Ae aaya police’ from the song Aala Re Aala. “My Cheerleader @deepikapadukone,” Ranveer captioned the video and also shared a few heart-eyes emojis. Deepika can be seen in a white shirt and a glass of champagne in his hand, giggling after singing the song. It isn’t known who has shot the video as Deepika is not in India currently.

He also shared a hilarious meme in his Instagram stories, poking fun at how drastically his outfits change when he is not around Deepika. 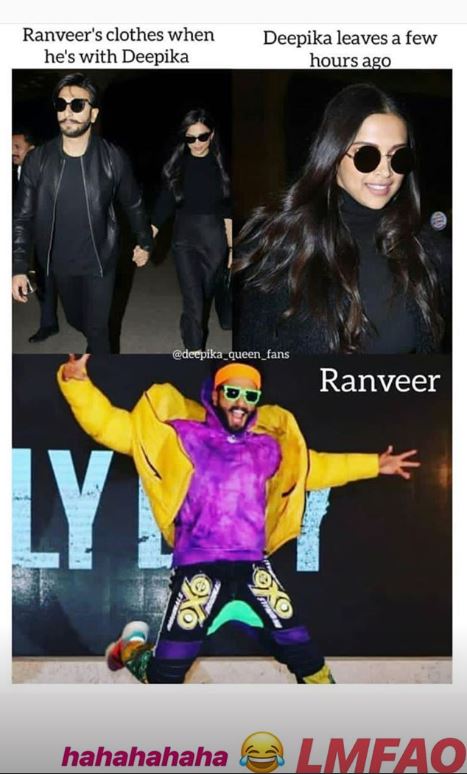 Deepika and Ranveer have taken their Instagram PDA to another level since their wedding in November. They share cute emojis and loved-up comments on each others’ pictures. Check out a few:

Ranveer’s Simmba as emerged as a blockbuster at the box office. The film made Rs 200 crore in 12 days of its release and it the biggest solo hit of Ranveer’s career. Filmmaker Karan Johar, who has produced the flick under his banner Dharma Productions, took to social media to celebrate the moment. He tweeted, “Crossing the 200 crore mark!!!!!!! #SIMMBA ruling the box office!!!!!”

The Rohit Shetty-directorial minted Rs. 100 crore within five days of the release and is the eight Rs 100 crore movie of his career. The film also stars Sara Ali Khan and Sonu Sood - who portrays the role of the antagonist in the action flick - and Ajay Devgn - who has a cameo. The flick is a remake of the 2015 Telugu blockbuster Temper starring N.T. Rama Rao Jr.