Home / Cities / Noida News / Over 3,700 kilos of explosives to bring down the Supertech twin towers today

Over 3,700 kilos of explosives to bring down the Supertech twin towers today

Supertech’s Apex and Ceyanne towers will be erased from the Noida skyline this afternoon in a series of controlled blasts.

A final check of explosives and related arrangements got underway on Saturday in Noida’s Sector 93A, where demolition agencies are all set to bring down the illegally constructed Supertech twin towers on Sunday afternoon.

The twin towers, Apex and Ceyanne, are the tallest structures in the country — and third tallest in the world — to be demolished in a controlled implosion that follows a Supreme Court order.

ALSO READ | What would be the aftermath of Supertech twin tower demolition today?

“The only element remaining to be connected is the final detonator — a 100m long cable that will connect the chargers in the structures to the detonator button. The flick of this switch will turn the towers into a pile of rubble in a matter of seconds. Once we get the clearance from police that the exclusion zone of 50 metres around the towers is empty, at 2.30pm on Sunday, we will press the button,” said Mayur Mehta, project manager, Edifice Engineering, which is handling the demolition. 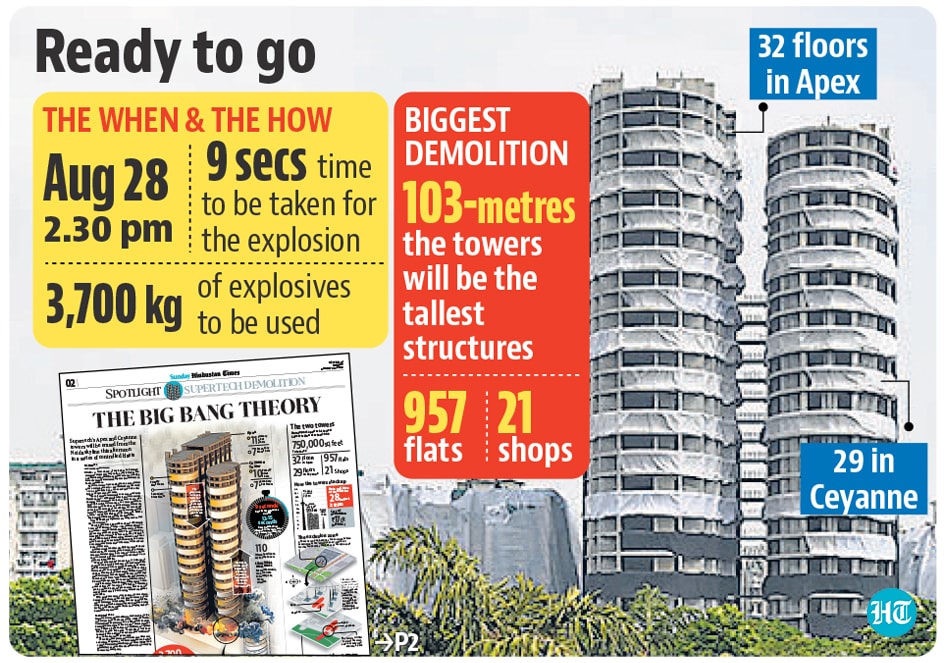 Over 3,700 kilos of explosives are being used to raze the two structures.

Nearly 80% of the 7,000-odd residents of Emerald Court and ATS Greens Village — the society adjacent to the towers — vacated their homes temporarily on Saturday evening itself, the police said. The rest, including some 200 pets, will leave by 7am on Sunday. Vehicles, about 3,000 in both societies, will be allowed to move out from the exclusion zone till 7am, after which no human nor animal, save for the demolition team, will be allowed in the critical zone.

Resident welfare bodies of adjoining societies have issued advisories to residents and are making arrangements to accommodate those who are evacuated from the two societies. The most important advice is to not panic, say RWA officials.

“We have prepared five rooms in our clubhouse as guest rooms, for ailing residents who need immediate medical attention. A fully equipped ambulance will be stationed near our premises. The ground floor of the club has been kept for housekeeping staff, and security guards will move into the basement; they will emerge once the dust settles,” said Darain Shahidi, president, Eldeco Utopia apartment owners’ association (AOA).

Utopia has also offered 50 free parking spaces to residents of Emerald Court and ATS Village. Swimming pools, overhead tanks and green areas have been covered by plastic sheets in all housing societies in Noida’s Sector 93A.

RWA groups are also getting pulmonary tests of residents done, before and after the blast, to assess the dust and debris impact. Authorities have set up sprinklers, smog guns, pollution monitoring equipment and other devices at the site, but there will be no escaping the dust, demolition experts said.

Diversions will come into effect on roads leading to the twin towers from Sunday morning, while the Noida-Greater Noida Expressway, barely 200 metres from the demolition site, will be closed to vehicular movement from 2.15pm to 2.45pm, deputy commissioner of police (traffic) Ganesh Saha said. Google Maps will have updated feeds on diversions and real-time traffic situations on Sunday, traffic police said.

Over 400 police personnel will take care of security and other arrangements, while six ambulances, four fire tenders, National Disaster Response Force (NDRF) and paramilitary teams and four hospitals will be on standby in case of an emergency.

The twin towers will be razed using the “waterfall implosion” technique -- about 1,500 chargers will be detonated remotely in a synchronised manner to bring down the towers within nine seconds, Edifice said. The event will generate about 80,000 tonnes of debris and a huge mushroom cloud of dust, the management of which will push Noida authority’s sanitation team to its limit. About 25,000 tonnes of the debris will have to be scientifically disposed of in three months.

Authority chief executive officer Ritu Maheshwari said all arrangements are being made to clear the dust from the area immediately after the demolition. “Besides sanitation workers, mechanical sweeping machines, anti-smog guns, and water sprinklers will be placed at the site,” she said.