Schools have been shut for the day in the wake of heavy rainfall warning issued by the India Meteorological Department (IMD) in Mumbai. Heavy traffic and water logging has brought the city to a standstill.Suburbs of the city recorded 131.4 mm (very heavy) rainfall over the last 24 hours (between 8.30 am on Monday and 8.30 am on Tuesday). “In wake of IMD’s warning of heavy rainfall for rest of the day, schools shall remain closed today. Principals of schools where students are already in, are requested to take precautions and ensure that they are sent back home carefully and safely,” Brihanmumbai Municipal Corporation PRO said, according to news agency ANI.Highlights:

For stranded railway commuters, BMC has opened temporary emergency shelters at 145 schools around railway stations, where food water, seating and bedding is available for people. In some schools, medical aid is also available.

The BMC said that the residents around Mithi River have been evacuated temporarily to a safer BMC shelter. NDRF official said, “There are more than 7000 people living around the Mithi River in Kurla, Sakinaka and Marol. We are evacuating people from the slum pockets around the river.”

Santacruz weather station records 206.6mm rain, denoting extremely heavy rain category, in six hours between 8.30 am - 2.30 pm today. Meanwhile, Colaba recorded 55.6mm during the same time. Mumbai has surpassed its September average rainfall mark of 327.1mm in less than four days. The city has so far recorded 488.7mm from September 1 to 4 till 2:30 pm.

A school bus seen wading through the inundated roads of Mumbai. 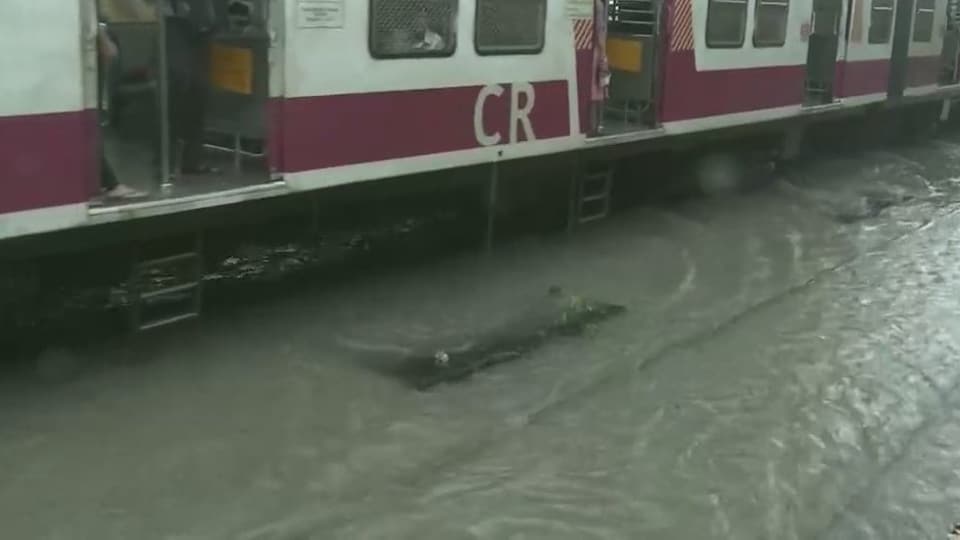 IMD has updated its forecast and issued a ‘red alert’ warning for Mumbai, Thane, Palghar and Raigad with over 200mm rain expected over the next 24 hours.

“Due to continuous heavy rains and waterlogging between Vikhroli -Kanjurmarg, services on all six lines (slow, fast, 5th and 6th lines) have been stopped. Our team is assessing the situation for resumption of services as early as possible. Services are running between Thane-Kasara/Karjat,” said Central Railway.

Konkan route traffic hit due to mud and land slide between Nagothane and Roha because of heavy rains. Goa-bound trains have been stopped, but the Mumbai-bound trains are running.

Trains terminated, reversed due to waterlogging at Vasai-Virar

On Western Railway, train operations have been suspended between Vasai and Virar railway stations as water level above 300 mm on railway tracks at Nalasopara railway station.

Local services on Central Railway between Kurla and Matunga suspended

Lowest visibility at Mumbai airport between 5 and 6 pm

According to IMD, the lowest visibility on Tuesday was 800m at the Mumbai airport between 5 and 6 pm.

Workers of Brihanmumbai Municipal Corporation try to drain the stagnated rain water from subway using pump at Andheri in Mumbai. 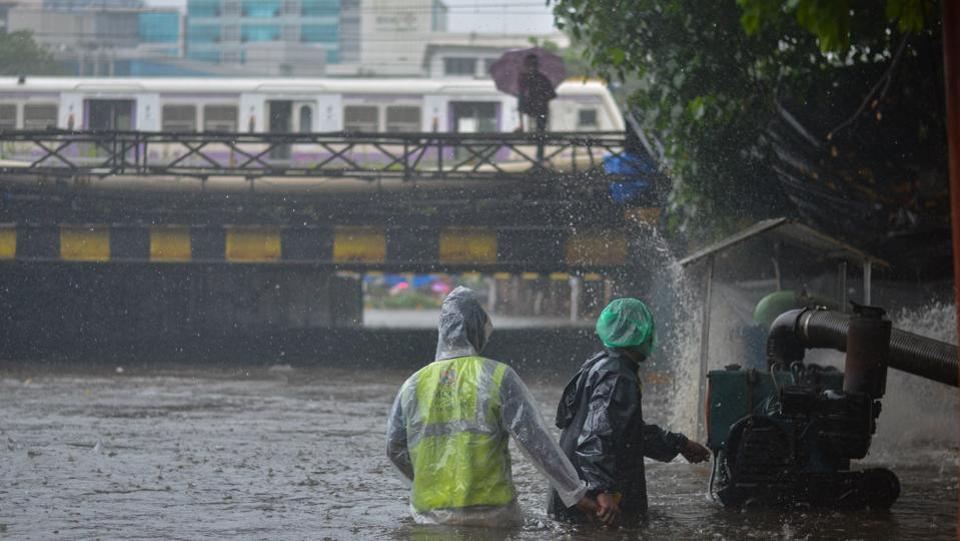 King’s Circle has been inundated after the heavy rainfall. 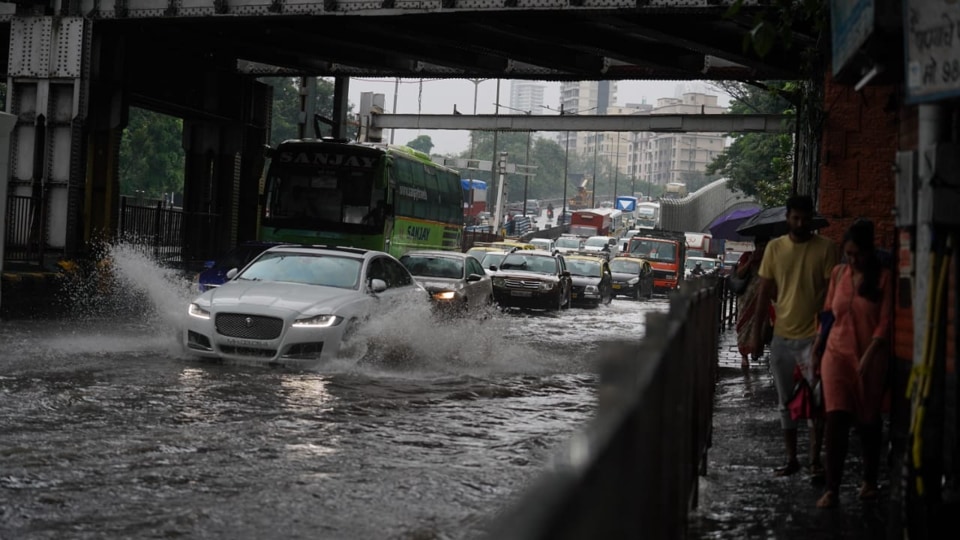 Since there has been water logging in several Ganpati pandals at Sion and Kurla, Brihanmumbai Sarvajanik Ganeshotsav Samanvay Samiti, the umbrella body of all Ganpati mandals in the city, have issued instructions to Ganpati mandals asking to cut off their electric supply.

Mumbai’s Sion area gets water-logged following rainfall in the city.

There is water logging at Hindmata, Parel, after heavy rainfall in the city today morning. 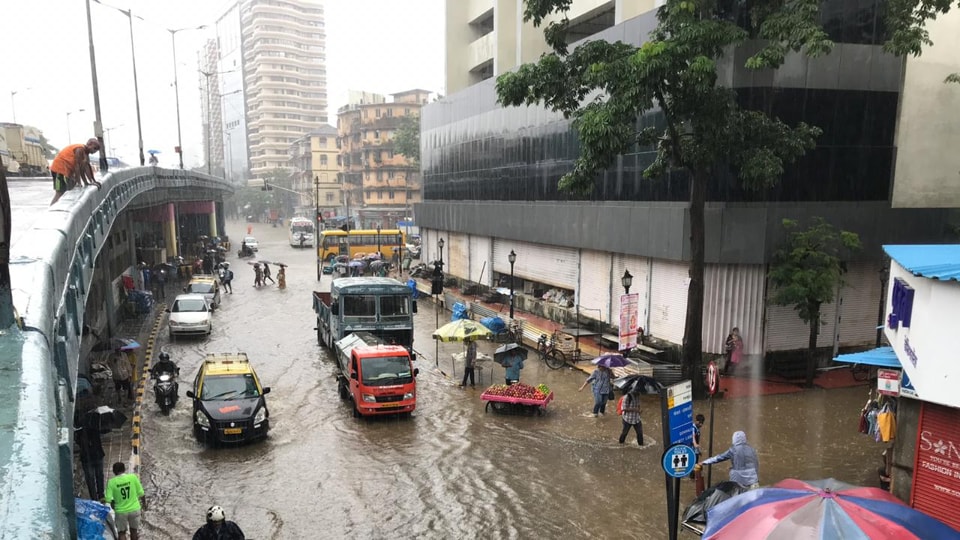 Schools to remain shut for the day

As a precautionary measure in wake of IMD’s warning of heavy rainfall for the rest of the day too, the schools shall remain closed today. The Principals of the schools where students are already in, are requested to take all precautions and ensure that the children are sent back home carefully and safely.

Heavy rainfall for the second consecutive day in Mumbai

Heavy rainfall continues to lash Mumbai for the second consecutive day, throwing life out of gear in the city. Suburbs of the city recorded 131.4 mm (very heavy) rainfall over the last 24 hours (between 8.30 am on Monday and 8.30 am on Tuesday).