Are city roads prepared to brave the monsoon onslaught? Not quite.

This is the verdict of a four-member HT panel who examined five arterial roads — Babasaheb Ambedkar link road, Sion-Mahim link road, Ghatkopar-Mankhurd link road, SV link road and Andheri-Kurla link road — on June 2. The exercise is part of HT’s monsoon audit. Over the past two days, HT reported how ill-equipped Mumbai’s stormwater drains are to prevent flooding. The audited five roads scored a dismal 5.9 out of 10 marks.

Of the five roads, Andheri-Kurla link road fared the worst with a rating of 3.4 out of 10 marks. Taken up for concretisation two years ago, the work is still in progress. The piecemeal concretisation has left the road uneven.The ongoing Metro-3 (Colaba-Bandra-Seepz) work has created bottlenecks and damaged drainage outlets on the stretch that connects Kurla (East) to the Western Express Highway, the panel found.

“The condition of the road is poor and drainage outlets are hard to find, which could lead to accumulation of rainwater on the road,” said Avijit Maji, a panel member and IIT-B professor.

For the island city, there is little to write home about. Babasaheb Ambedkar road near Gandhi Market in Dadar, is a chronic flooding spot, by the BMC’s own admission. During their visit, the experts found heaps of debris lying along the road. The worst fears came true during Thursday’s pre-monsoon showers when the road was flooded. After auditing nine major nullahs, the HT panel turned their watchful gaze to five arterial roads. They found that ride on Mumbai’s roads still remains bumpier. They were unanimous in their unflattering observations: unreliable paver block patchwork, uneven roads, and traffic obstruction and damage to drainage outlets owing to Metro work. Here is the report card of the roads: WHY IT MATTERS: A vast stretch of the road runs from Sion to CSMT. Many chronic spots such as Gandhi Market and Dadar TT witness waist-high water during downpour. Besides, the road is plagued with huge traffic snarls during monsoonWHAT HT PANEL FOUND:The quality of the road was satisfactory but needed regular maintenance. However, at many places, silt was dumped at roadside, which would slow the traffic. A dewatering pump had been installed at Gandhi MarketEXPERTSPEAK: "Owing to poor repairs at some places, the patchwork is visible. This will slowly damage the road," Vidya Vaidya, activist of BRAVOSION-MAHIM LINK ROAD 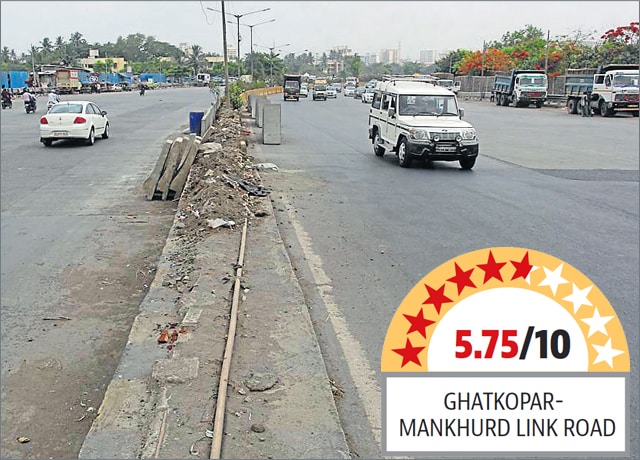 WHY IT MATTERS:The road starts from the Eastern Express Highway junction and connects to Mankhurd. Thousands of motorists rely on the road for the south-bound stretch of the Eastern Freeway.WHAT HT PANEL FOUND:Concretisation of the road had been completed. The service road towards Ghatkopar was found in a bad condition, and paver blocks were dislodged.Illegal parking by heavy vehicles added insult to motorists’ injuryEXPERTSPEAK: "Drainage outlets between the median and service road have been damaged or encroached upon. This will lead to accumulation of water and subsequently throw traffic out of gear," Avijit MajiSV ROAD, SANTACRUZ-ANDHERI WHY IT MATTERS:It is an arterial road that begins from Bandra and ends at Dahisar. Parts of the road are also among chronic flooding spots, especially one between Khar and AndheriWHAT HT PANEL FOUND:The recently repaired stretch from Santacruz to Andheri was satisfactory. But the driving was still bumpy. The sides of the road needed more attentionEXPERTSPEAK: "At many places, we saw that water outlets have been encroached upon or closed during road repair/reconstruction. During heavy rainfall, this will obstruct draining," said Girish Patil, former BMC officialANDHERI-KURLA LINK ROAD 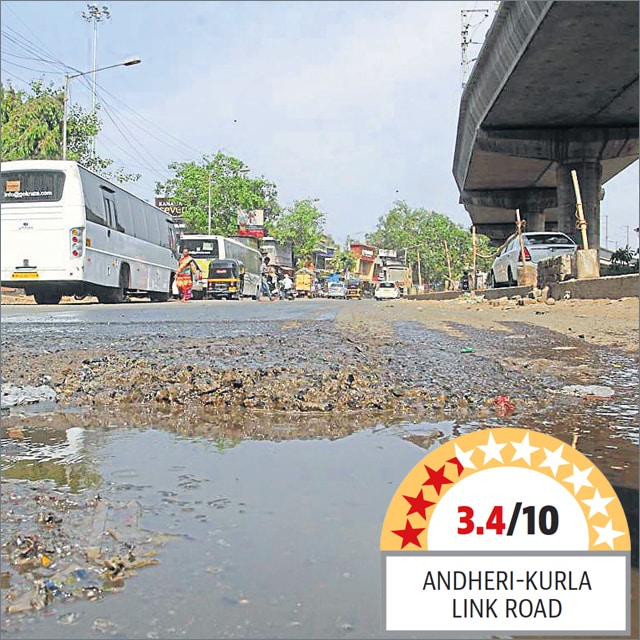 WHY IT MATTERS:This is another important east-west connector and links Kurla to the Western Express Highway. One of the connecting roads to the airport regularly witnesses traffic jamWHAT HT PANEL FOUND:The BMC was concretising the road. The quality of concrete seemed satisfactory. At some places, the BMC had used unreliable paver blocks. Parts of the road passing under Metro stations were damaged. Metro work would aggravate motorists’ plightEXPERTSPEAK: "At many places, the road is being constructed. A real assessment will be possible after work is completed. Drainage outlets are hard to find," Avijit Maji.
HT PHOTOS: PRAFUL GANGURDE | GRAPHICS: HITESH MATHUR

The panel unanimously gave a thumbs down to Sion-Mahim link road, another east-west connector, and predicted that it will be worst hit during a downpour. The Metro construction material dumped along the road will create bottlenecks, said Nandkumar Salvi, another panel member and retired BMC chief engineer. Experts suspect the debris from Metro work has blocked drainage outlets.

At the time of the inspection by the panel, the BMC was carrying out repairs on Ghatkopar-Mankhurd link road. Bad service road towards Ghatkopar and illegal parking will test motorists’ patience.

Work on the SV road stretch between Bandra and Andheri SV road looked complete. The quality of repairs — such as ad hoc paver block patches — failed to inspire confidence among the experts.

However, the panel was upbeat that SV and Ghatkopar-Mankhurd roads will remain motorable in the coming days.

Despite complaints, the BMC has been maintaining that it is happy with the repair or reconstruction of roads. Armed with a budget of more than ₹1,800 crore, the richest civic body in Asia, the BMC, had taken up relaying of 1,106 roads this year. Of them, 522 roads had been repaired as of May 31, claimed the BMC.