Home / Opinion / Can it be that riots guilty are only foot soldiers?

Can it be that riots guilty are only foot soldiers?

India has a spectacular record of not delivering basic justice when it comes to brazen riots, carried out in broad daylight, be it Delhi or Ahmedabad.

A few weeks before a Supreme Court-led investigation led to the conviction of Bharatiya Janata Party (BJP) legislator and minister Mayaben Kodnani in 2012, I was in Naroda Patiya, speaking with eyewitnesses who had stood firm for 10 long years. They had been threatened and intimidated for naming the minister.

They gave graphic descriptions of that day in February 2002, when their nondescript neighbourhood in Ahmedabad resembled a gigantic bonfire. Mobs had gathered at Noorani Masjid, located on the main road, and then roamed its labyrinthine bylanes, shouting ‘Jai Shri Ram’ slogans and brandishing swords and trishuls (tridents).

Among the 97 Muslims that the fire devoured were Shakeela Bano’s mother, two brothers, a sister-in-law and a young niece and nephew. Bano remembered the children being flung into the blaze. She and many others told the special court about Kodnani’s alleged role; of how she allegedly came to the area and exhorted the crowd to kill Muslims. They claimed she oversaw the distribution of swords and trishuls and assured the crowd that there would be no police enquiries against them. ◼ A coach of a train, carrying Hindu pilgrims, burns in Gujarat’s Godhra. (REUTERS FILE)
February 27, 2002: A fire guts a coach of a train carrying Hindu pilgrims, returning from Ayodhya, at the Godhra train station in Gujarat; 59 are killed in the blaze.Feb 28–Mar 2: Hindu mobs rampage through Muslim neighbourhoods as communal riots break out in several cities across Gujarat. In three days, 790 Muslims and 254 Hindus are killedFeb 28: Hours after Godhra train burning, a thousands-strong mob reaches Naroda Patiya – a predominantly Muslim neighbourhood in Ahmedabad. The mobs, instigated allegedly by BJP and Bajrang Dal activists, kill 97 people 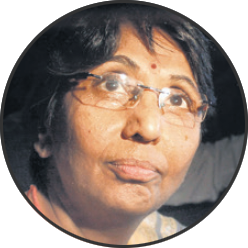 2002: Gujarat police start investigations, and Maya Kodnani — a state legislator at the time —is not among suspects named in the FIR2003: Kodnani’s name first appears in survivor accounts shared with the Nanavati-Shah commission set up to inquire into the Godhra train burning and subsequent riots. Witnesses also name Bajrang Dal leader Babu Bajrangi
2008: Kodnani is named in an investigation that is taken over by a special investigation team on the direction of the SC.August 2012: Kodnani, Bajrangi and 29 others are convicted by special court for the Naroda Patiya killings. Kodnani is given a 28-year prison term and Bajrangi ordered to spend rest of his life in prisonApril 2013: The Gujarat government led by Narendra Modi clears the way for prosecutors to seek the death penalty for Kodnani and others in a higher court, but reverses its stand in SeptemberJuly 2014: Gujarat high court grants Kodnani bail after accepting her plea that she is unwellAugust 2012-2018: Appeals against Kodnani and Bajrangi’s conviction and sentence are filed at the high court. Between 2014 and 2016, seven judges recuse themselves from the hearingApril 2018: High court acquits Kodnani, giving her the benefit of doubt, after noting inconsistencies in testimonies. HC also reduces Bajrangi’s sentence to 21 years

The police didn’t name her as an accused but the apex-court driven Special Investigation Team said it found evidence of her involvement – including call logs of her being in touch with the other Patiya accused.

The victims’ families led wretched lives for 10 years until judge Jyotsana Yagnik delivered her judgment in 2012, convicting Kodnani and sentencing her to 28 years in jail. Detailing the minister’s alleged role, the judgment called her the “kingpin of riots”.

Kodnani has now been exonerated by the Gujarat high court. Survivors such as Bano remain at the mercy of their neighbours, who have continued to threaten them for naming their Hindu neighbours. Patiya’s residents had, in the worst form of betrayal, turned on their own.

“Communal riots are like cancer on constitutional secularism and the incident in Naroda Patiya was a black chapter in the history of the Indian Constitution,” special judge Yagnik had observed. Her words had gone a long way in assuaging the wounds of Patiya’s survivors but today, the high court overturned the conviction, saying the witnesses were unreliable and that none of them had named Kodnani when the case was first registered.

India has a spectacular record of not delivering basic justice when it comes to brazen riots, carried out in broad daylight, be it Delhi or Ahmedabad. Who killed 3,000 people in Delhi and 1,000 in Gujarat? Can it be that the guilty are only petty foot soldiers? Did political exhorters have nothing to do with 1984 or 2002?