Around 10.40am, local residents spotted a bulldozer and two trucks parked on the main Shaheen Bagh road. Within five minutes, people started gathering there, a crowd that swelled to at least a thousand by afternoon

For three hours on Monday, South Delhi Municipal Corporation (SDMC) officials struggled to carry out a scheduled demolition drive against alleged illegal encroachments in the southeast Delhi’s Saheen Bagh area, only to return without dislodging a single structure in the face of stiff resistance by local residents and politicians who gathered on the main Shaheen Bagh road and did not allow the civic body vehicles to move.

SDMC officials reached the Shaheen Bagh police station at 10am to seek police backup. The Delhi Police had turned down earlier requests by the civic body, pointing out apprehension of law and order problem in the area. However, on Monday, the police allowed action, and a police team of 200 personnel and a company of central armed police force was gathered to accompany the civic officials. 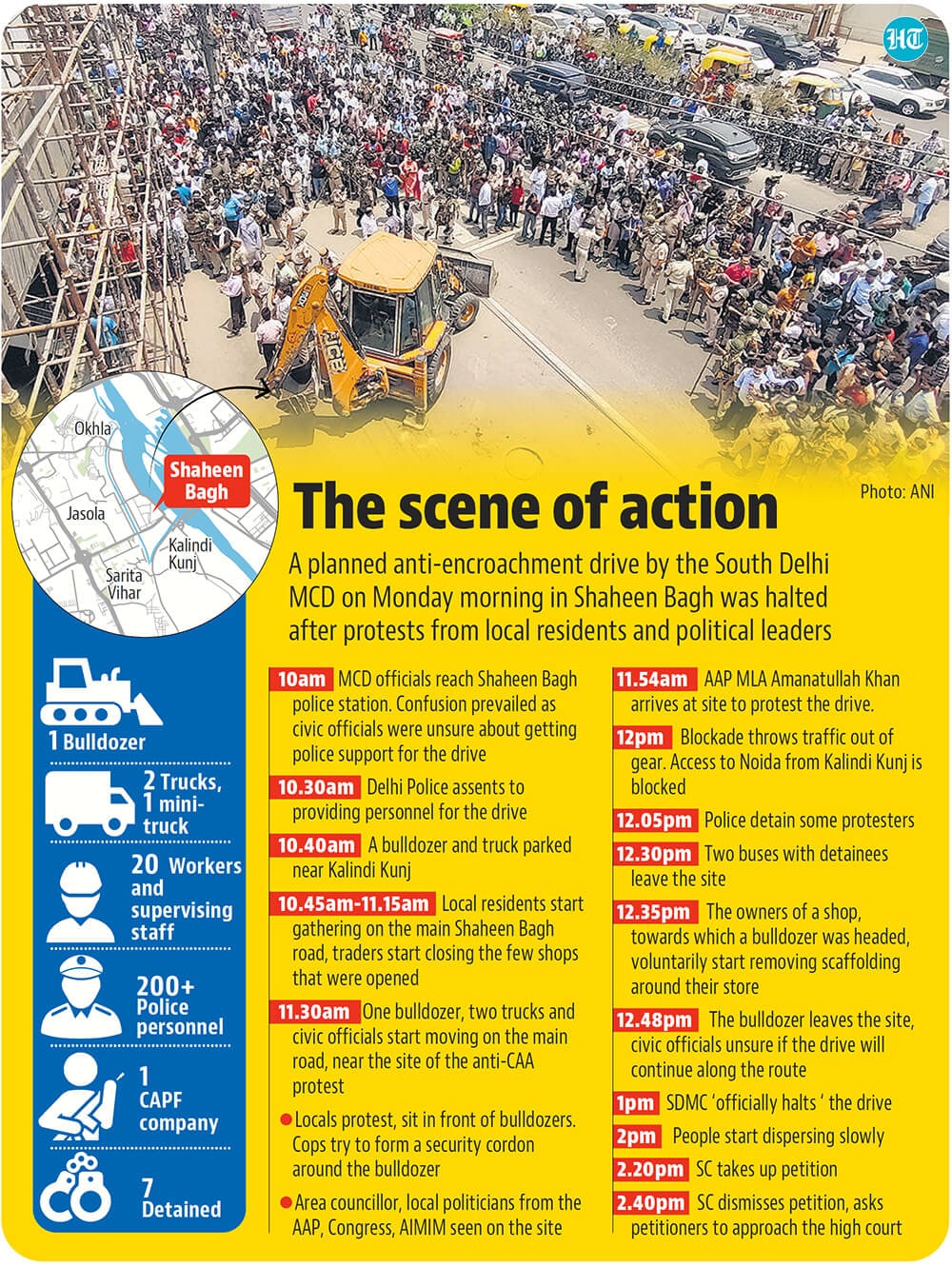 Around 10.40am, local residents spotted a bulldozer and two trucks parked on the main Shaheen Bagh road. Within five minutes, people started gathering there, a crowd that swelled to at least a thousand by afternoon.

An hour later, around 11.30am, when the corporation vehicles and the team of officials started moving towards the market, a huge crowd had gathered on the road. The local residents who alleged ‘selective action’ by the BJP-ruled corporation, sat around the bulldozer even as the police officials formed a security cordon around the officials and the vehicles.

Soon local MLA Amanatullah Khan and several other politicians reached the site with their supporters. By this time, the entire road had been taken by the crowd, completely cutting the movement of vehicles.

Imran Pratapgarhi, national chairman of the Congress’ minority wing, said the BJP-ruled MCD was removing non-existent encroachments instead of clearing waste littered on the roads. “Where is encroachment here? Are all unauthorised colonies encroachment? We are with democracy and the BJP is with bulldozer,” he added.

Delhi BJP chief, in a press conference on Monday, said, “Today’s action is not the first anti-encroachment drive; close to 40 such actions have been taken in the past one-and-a-half months in various parts of the city. But opposition parties are giving it a communal colour.”

A municipal official, who was part of the enforcement team, that the drive could not be continued as the bulldozer could not be moved in the middle of the crowd. “There were more than a thousand people. At one point, we were apprehensive that someone may get injured and things would escalate,” the official said, adding that the area should have been “sanitised” before initiating the drive.

A senior police officer, however, said the bulldozer wasn’t used because of the presence of high-tension wires in the area.

“There were high-tension wires and for the safety of staff and public, the bulldozer wasn’t used. The iron scaffolding outside a building was removed manually,” the officer said, adding that seven people protesting against the drive were detained.