The Delhi Metro Rail Corporation (DMRC) has submitted revised project reports of two proposed Metro extensions in Ghaziabad, which will considerably benefit commuters of the city as well as trans-Hindon areas in getting direct connectivity with Central Delhi and neighbouring Noida. Officials of the Ghaziabad Development Authority (GDA) said that the revised reports figured in a meeting recently held in Lucknow.

In February last year, the DMRC had submitted a detailed project report (DPR) of the two extensions — Noida Sector 62 to Sahibabad (phase 3) and Vaishali to Mohan Nagar (phase 4). The GDA later planned to take up the Sector 62 extension to Mohan Nagar instead of its termination at Sahibabad, and requested the DMRC to submit revised project reports for the two Metro extensions. 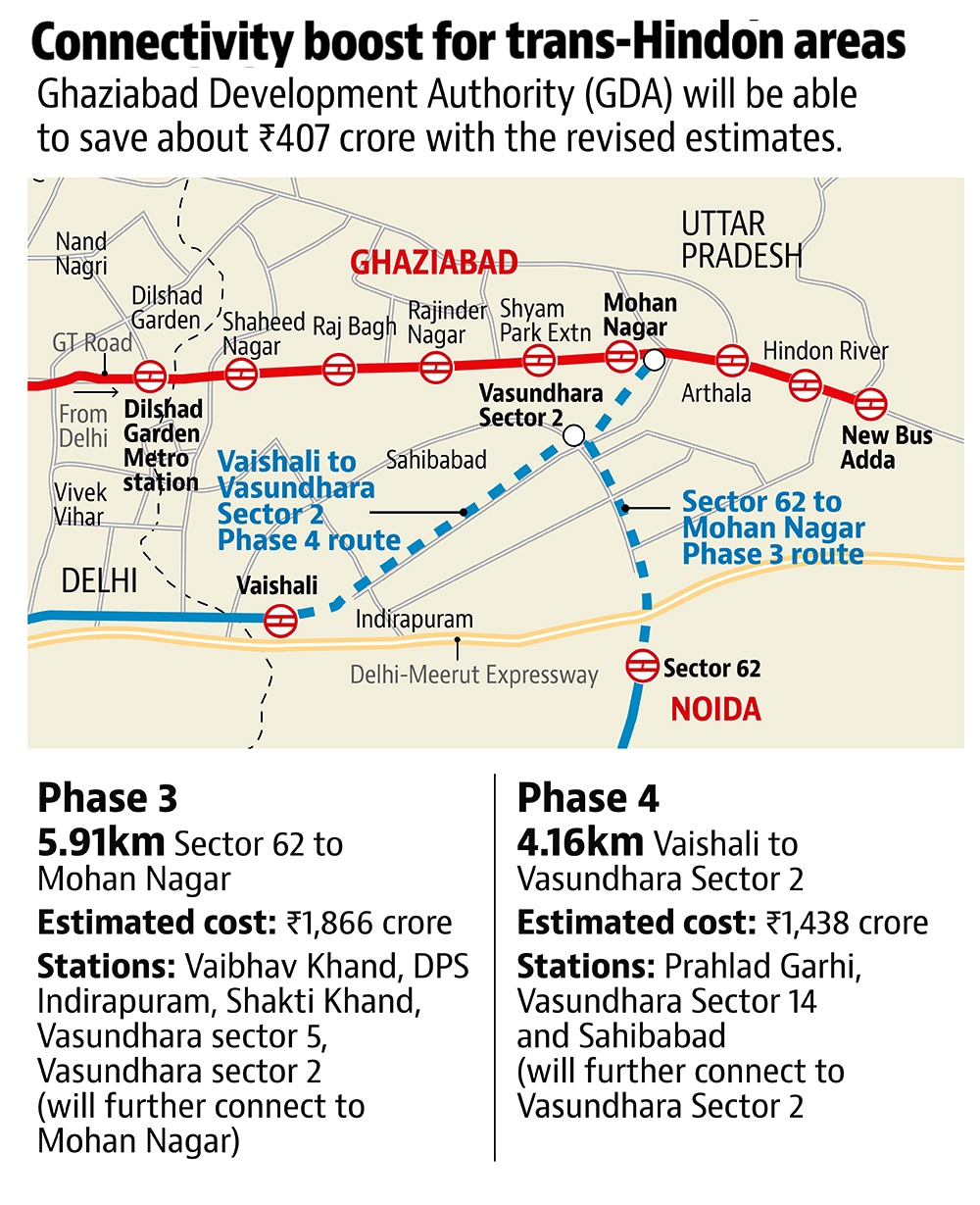 “The revised reports of the two extensions were presented before state government officials by the DMRC in a meeting at Lucknow on Monday. A copy was also received by GDA. As per the revised plan, Sector 62-Sahibabad line will now be extended to Mohan Nagar, while Vaishali-Mohan Nagar corridor will be extended to Vasundhara Sector 2. The cost of the two projects has also come down as per the revised estimates,” said Kanchan Verma, GDA vice-chairperson.

According to the last year’s DPR, the estimated completion cost of the phase 3 was pegged at ₹1,926 crore, while the cost of phase 4 was stated at ₹1,785 crore.

Now, with the revised estimates, the authority will be able to save about ₹407 crore as the revised cost for phase 3 stands at ₹1,438 crore and ₹1,866 crore for phase 4. Both the elevated corridors will be extension of Blue Line.

“We have already planned that phase 3 will be taken up first. At Sahibabad, the regional rapid transit system corridor will also pass near the metro route. It is also possible that a foot over bridge of 150-200 metre can be constructed to provide interchange facility between the two systems. The funding patterns will be decided at the government level,” Verma added.

With Mohan Nagar is proposed to get connected under the phase 3, it will also become an interchange hub for Metro commuters. Anyone boarding a train from Shaheed Sthal (New Bus Adda) will be able to travel to Central Delhi or Noida with the help of the two routes.

The phase 3 will provide direct connectivity to commuters from Sahibabad, Vasundhara and Indirapuram to Noida. Likewise, the phase 4 will benefit commuters from Vasundhara, Sahibabad and even Vaishali to connect them directly to Central Delhi.