The city’s air quality index (AQI) eventually settled in the “very poor” category with a reading of 366, according to the 24-hour rolling average at 4pm.

Delhi’s air quality inched perilously close to “severe” on Friday, sparking fears that the Capital’s annual pollution ordeal during the festive season and the winter months have returned despite mitigation plans that may again come to naught as the situation is expected to worsen over the weekend.

The city’s air quality index (AQI) eventually settled in the “very poor” category with a reading of 366, according to the 24-hour rolling average at 4pm. It was the worst in nine months and marked a sharp deterioration from Thursday’s 296, which was in the “poor zone”, according the Central Pollution Control Board (CPCB).

But during the day, at least 12 of 35 monitoring stations in Delhi hit the “severe” level with the overall air quality bordering the lowest classification. It was on January 22 (AQI of 370) that the air in the Capital was worse than that on Friday, when a toxic haze hung over the city. 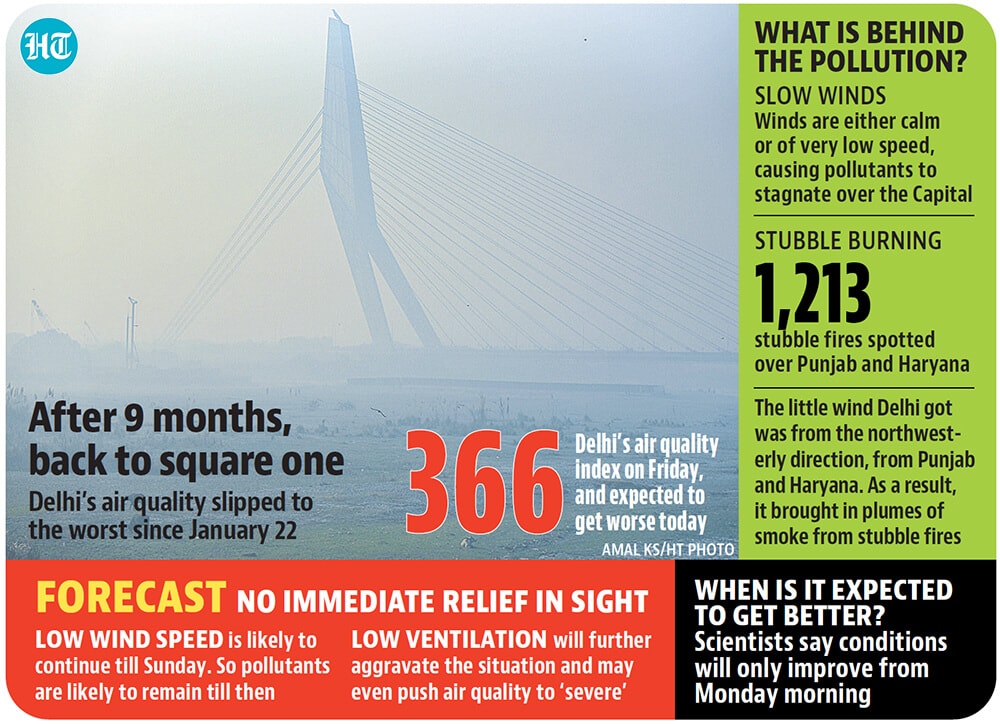 An AQI of 201 to 300 is considered “poor”. A reading of 301 to 400 is in the “very poor” category and is associated with respiratory illnesses, especially in children and those exposed to the bad air. An AQI of 400-500 is considered “severe”.

Scientists attributed the bad air to calm surface wind conditions that have led to the accumulation of pollutants in the atmosphere, and variable wind direction that brought pollutants from stubble burning in Punjab and Haryana towards the National Capital Region (NCR).

There were 1,213 farm fires recorded in the two states on Thursday, and the share in pollution was 17% on Friday — up from 9% the previous day.

VK Soni, head of the environment monitoring research centre of the India Meteorological Department (IMD), said weather conditions were likely to remain unfavourable for the dispersal of pollutants through the weekend.

“Surface winds are either calm, or there has been extremely low wind speed since Thursday. The pollution, which has accumulated, is not dispersing. We are not expecting these conditions to improve till Sunday. Overall, wind direction is northwesterly, which means stubble fires (in Punjab and Haryana) are also impacting the air quality in Delhi,” Soni said.

Experts feared that Delhi’s air might turn dirtier over the weekend, before improving marginally from October 26. The air will start deteriorating again from October 29, according to IMD forecast.

“The wind speed will remain low till October 25, after which we expect that there would be a slight improvement. But with the temperatures falling at the same time, the pollution levels could spike again from October 29,” said Kuldeep Shrivastava, head, regional weather forecasting centre, Delhi.

Bad air during this time of the year has been a recurring problem for Delhi and the northern plains due to a combination of factors, including meteorological changes, crop stubble burning, and festive firecracker bursting during Diwali.

To fight the annual crisis, the Supreme Court-appointed Environment Pollution (Prevention and Control) Authority, or Epca, implemented a series of steps on October 15 under the winter phase of what is known as the Graded Response Action Plan (Grap), including banning diesel generator sets, laying stress on 13 pollution hot spots in the city, mechanised sweeping of roads and strict dust control measures at construction sites.

“While there is no need to panic, we have directed all agencies to start water sprinkling and monitor local pollution sources. Enforcement will be the key in the coming days,” said EPCA chairperson Bhure Lal. He added that all concerned government agencies in the national capital region (NCR) have been directed to keep a close watch on the pollution levels and act accordingly.

Anumita Roychowdhury, executive director (research and advocacy), Centre for Science and Environment, said the city was facing a difficult situation since the Covid-19 crisis made people more vulnerable.

“...the focus of enforcement agencies should be to improve the action on ground before people’s health start getting impacted by this annual air problem,” said Roychowdhury.

“We have started a campaign across the city to control vehicular emissions — red light on, gaadi off — in which we are encouraging people to switch off their ignitions while they wait for the red light to turn green,” Rai said.

But experts feared the plans would once again do little to prevent the city from, once again, plunging into a bad air emergency.

Dosing error turns into lucky punch for AstraZeneca and Oxford