Home / India News / 70% of wild tigers in the world are in India: Report

70% of wild tigers in the world are in India: Report

india news
In the span of 12 years, India has more than doubled its number of tigers, a feat that one expert attributed to “sovereign funding and field staff”.
Share Via
Copy Link
Hindustan Times, New Delhi | ByJayashree Nandi

India now has 2,967 tigers, or 7 out of every 10 big cats in the wild in the world, according to the All India Tiger Estimation Results released on Monday by Prime Minister Narendra Modi on the occasion of International Tiger Day.

“India, with around 3,000 tigers, is one of the biggest and safest habitats for tigers in the world. Three-fourths of the world’s tigers are in India… it is possible to strike a healthy balance between environment and development,” Modi said while releasing the new numbers.

The new numbers have brought cheer to wildlife enthusiasts and conservationists but the Tiger Status Report 2018 has also raised some concerns about the number of tigers in the northeast and in Chhattisgarh. 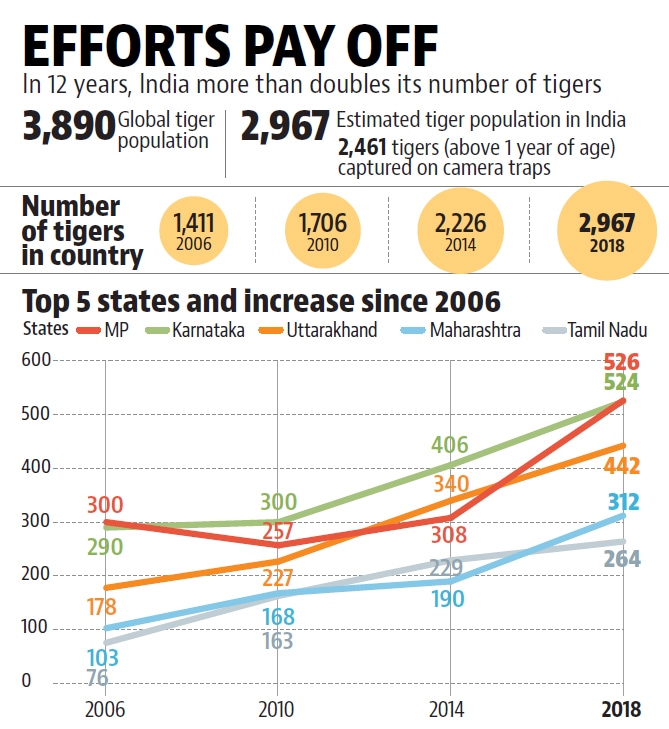 Tiger occupancy — forests occupied by tigers — has reduced significantly in the northeast from 9,901 sqkm to 3,312 sqkm. Occupancy has also reduced in the Shivalik range.

“North East Hills and Odisha remain critically vulnerable and need immediate conservation attention. The tiger reserves of Nameri and Pakke have registered declines, while tigers have not been recorded in Buxa, Palamau, and Dampa in this assessment. The poor tiger status in Indravati (Chhattisgarh) was related to law and order situation in these areas,” the report read.

On the brighter side, 83% of the tigers were actually camera trapped, adding credibility to the numbers. The National Tiger Conservation Authority (NTCA) and Wildlife Institute of India (WII) team in charge of the count made some changes in the methodology with more dependence on camera trap images of tigers. “Spatial data on individual tiger photo-captures is used in combination with spatial data on prey, habitat, and anthropogenic factors as co-variates,” the report said, describing the methodology.

India’s tiger count methodology has been questioned by some scientists who have issues with the so-called double sampling methodology which the country uses to estimate tiger numbers. India abandoned the pug mark census method in 2004 after this failed to detect the complete extinction of tigers in Sariska tiger reserve. The new method involves ground surveys of all tiger bearing forests, estimating prey abundance, understanding habitat characteristics, mapping other tiger signs, and camera trap pictures of tigers. In the double sampling method, counts of tiger tracks are correlated with actual tigers photographed in small areas to provide region wide estimates. This is vulnerable to over-estimation experts like veteran wildlife biologist K Ullas Karanth have previously pointed out.

Arjun Gopalaswamy, statistical ecologist who has also highlighted the issues with India’s methodology said, “Only a summary report has been released now. We need to see the detailed report to understand what has changed.”

Nepal which released its tiger numbers also recently has managed to double its numbers from 121 in 2009 to 235 in 2018; Bangladesh has about 114 tigers. New numbers for China, Malaysia and Russia are not available. Wild tigers are almost extinct in Cambodia, Laos and Vietnam.

Gopal however cautioned that India may be close to reaching a saturation point with tigers. “We have to consider carrying capacity. We have reached a level where we should consolidate and prepare for interface.”

Other experts said much more can be done to improve tiger numbers outside reserves. “There are lots of reserve forests which continue to hold tigers in very low densities and are in need of protection. For example, in Karnataka there are forests outside protected areas in Hassan, Uttara Kannada, Kodagu, Chikmagalur and Belgaum districts which have high potential. If these areas are provided adequate protection there is scope for tiger numbers to increase, and also for younger individuals from areas that have reached ecological carrying capacities to move and establish territories in new areas.It is the same for Tamil Nadu, Uttarakhand and many other states,” said Sanjay Gubbi, wildlife biologist.