Cyclone Fani, one of the biggest storms to come off the Indian Ocean in recent years, made landfall in Odisha’s Puri on Friday, India’s Meteorological Department said.Watch: What cyclone Fani’s landfall at Puri looked likeMore than 1 million people were evacuated from vulnerable districts in last 24 hours. On Thursday, the Odisha government conveyed to the National Crisis Management Committee (NCMC), the country’s top body for handling emergency situations, that 10,000 villages and 52 towns in nine districts will be affected due to Cyclone Fani , a home ministry statement said after a meeting of the NCMC, which was headed by cabinet secretary PK Sinha.Read: Cyclone Fani smacks Odisha with 180 km/hr winds,damaging houses, uprooting treesHighlights:

Manipur: Indian Navy Diving Team recovered bodies of 2 persons from Imphal River on May 3. 3 members of a family were reported missing at Mapithel Dam Reservoir; one body was recovered on May 2. Team will now be deployed in rescue&relief ops in West Bengal in wake of Cyclone Fani.

Manipur: Indian Navy Diving Team recovered bodies of 2 persons from Imphal River on May 3. 3 members of a family were reported missing at Mapithel Dam Reservoir; one body was recovered on May 2. Team will now be deployed in rescue&relief ops in West Bengal in wake of #CycloneFani pic.twitter.com/cvQsEVwXg3

Odisha: Quick Reaction Team of Navy from INS Chilka provided emergency assistance in nearby villages in cutting&clearing of trees which had fallen due to #CyclonicStormFANI y’day. Quick Reaction Medical Team of Navy conducted mobile medical camps at various villages around Chilka.

Odisha: Quick Reaction Team of Navy from INS Chilka provided emergency assistance in nearby villages in cutting&clearing of trees which had fallen due to #CyclonicStormFANI y'day. Quick Reaction Medical Team of Navy conducted mobile medical camps at various villages around Chilka pic.twitter.com/4TjDNpr5A1

Two die as tree falls on them in Odisha’s Baripada

2 youth died in Baripada town of Mayurbhanj after a tree fell on them following the cyclonic storm. :ANI

Kolkata airport, which had put operations on hold due to Cyclone Fani, is going to resume them from 3 pm tomorrow.

Road communication in Ganjam and Gajapti has been completely restored, according to a government report on the status of the storm. Road clearance and restoration works in other districts, including Bhubaneswar city, is going on.

Telecom network in Andhra to be fully functional by tomorrow morning

While the telecom network in Andhra should be fully functional by tomorrow morning, the restoration of network in Puri and Bhubaneswar, where extensive damage was recorded, has started.

The railways has permitted a free transportation of relief material by coaching trains to Odisha, Andhra Pradesh and West Bengal, the states affected by Cyclone Fani, according to a Ministry of Railways release. All government and a few other organisations, as deemed fit by Divisional Railway Managers can send relief material to the affected states free of cost.

‘Efficiency’ and ‘accuracy’ of RTGS praised

According to an official release, Odisha chief secretary Aditya Phadi called his Andhra Pradesh counterpart L V Subrahmanyam and expressed his gratitude to the AP government and the services extended by RTGS. “The Odisha government praised the efficiency and accuracy of the RTGS,” the official release said.

Odisha govt thanks Andhra Pradesh for help during Cyclone Fani

The Odisha government on Friday thanked the Andhra Pradesh government for its timely support through Real Time Governance Society (RTGS) which helped minimise loss to properties and human lives in the super cyclone Fani.

Over 11.5 lakh people evacuated and sheltered from 18 districts of Odisha

As many as 11,59,439 persons in 18 districts and one ULB have been evacuated and sheltered in 6,564 cyclone shelters in Odisha. Free kitchens has been set up for them.

As many as 2,000 electric poles have been uprooted and 117 sub stations destructed in Andhra Pradesh after the cyclonic storm Fani hit the State’s coast on Friday. Despite the high level of damage to the state infrastructure, no loss of life has been reported as of now.

Power supply has been snapped due to uprooting of electricity poles and damage to substations and KV lines has been reported. Telecom towers have also been affected, resulting in cellular and telephone network being down; all telephone and cell phones are down in Puri district.

Four districts - Cuttack, Khordha, Bhubaneswar and Puri - have borne the brunt of Cyclone Fani, according to a report sent by the Odisha government to the Centre. The report says there is extensive damage to dwelling houses.

“After making landfall this morning, Cyclone Fani has started weakening and it’s likely to enter Bangladesh by tomorrow evening. No cyclone ever had such a long duration in April,” KJ Ramesh, director general of IMD, said while speaking to reporters.

Prime Minister Narendra Modi said on Friday the Centre has released more than Rs 1,000 crore to all the states, which will face the brunt of Cyclone Fani that made landfall near Puri. Prime Minister Modi, who was addressing an election rally in Rajasthan, said the Centre is in touch with government in Odisha, West Bengal, Andhra Pradesh, Tamil Nadu and Puducherry.

The All India Institute of Medical Sciences (AIIMS) branch in Bhubaneswra reported extensive damage hours after the Category 4 Cyclone Fani made landfall on the Odisha coast wreaking havoc and leaving a trail of destruction. “Extensive damage to structure of AIIMS Bhubaneswar reported. All patients, staff, students safe. Many water tanks have blown off,lighting poles are down, air-conditioners damaged. We have enough supplies, ready to support the state,” said Health Secretary Preeti Sudan.

A girl born during cyclone is named Fani

A 32-year-old woman gave birth to a baby girl in Odisha Railway Hospital today at 11:03 AM. Baby has been named after the cyclonic storm, Fani. The woman is a railway employee, working as a helper at Coach Repair Workshop, Mancheswar, reports ANI.

Bhubaneswar: A 32-year-old woman gave birth to a baby girl in Railway Hospital today at 11:03 AM. Baby has been named after the cyclonic storm, Fani. The woman is a railway employee, working as a helper at Coach Repair Workshop, Mancheswar. Both the mother&child are fine. #Odisha pic.twitter.com/xHGTkFPlAe

One more death reported, toll goes up to 3

Cyclone Fani, the strongest storm to hit India since 2014, is weakening after barrelling into Odisha, K. J. Ramesh, Director General of the IMD, told reporters. “After making landfall this morning, cyclone Fani has started weakening and it’s likely to enter Bangladesh by tomorrow evening,” he said. “No cyclone ever had such a long duration in April,” he added

Two people died on Friday as Cyclone Fani slammed Odisha, an official said. “I can confirm two deaths for now. One old man in one of the shelters died because of (a) heart attack. Another person went out in the storm despite our warnings and died because a tree fell on him,” Odisha state special relief commissioner Bishnupada Sethi told AFP.

Entire nation with you, says PM Modi to cyclone-hit states

The Centre is in touch with state governments in south and east India that are facing the brunt of Cyclone Fani, which hit the Odisha coast at Puri on Friday morning, Prime Minister Narendra Modi said in Rajasthan’s Hindaun during an election meeting. Read details here

Model code of conduct, in place for Lok Sabh elections, has been relaxed in four Andhra Pradesh districts -- East Godavari, Visakapatnam, Vizianagram and Srikakulam -- in view of relief work required due to destruction caused by cyclone Fani. Read details here

Several trees have been uprooted in Bhubaneswar in the heavy rain and strong winds that hit the region on Friday. 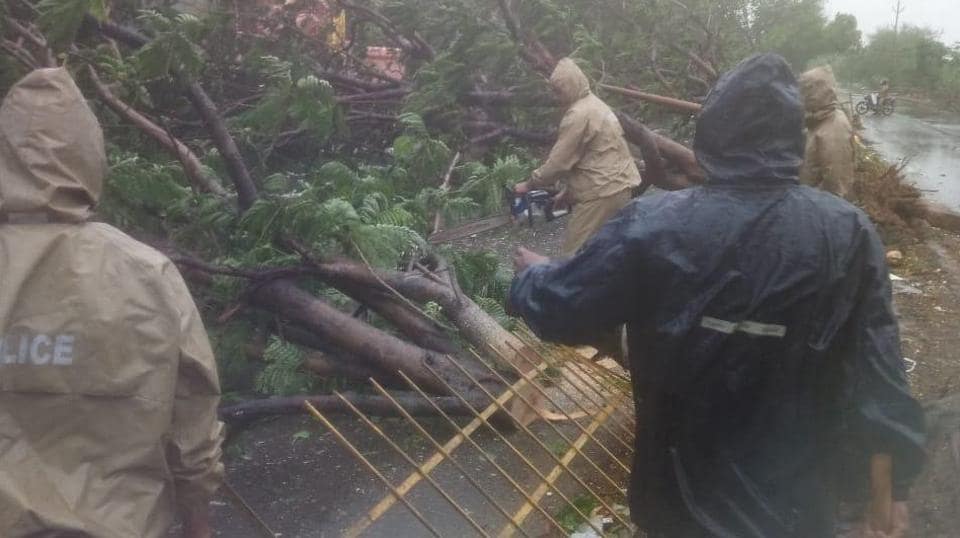 Airlines must immediately respond to concerns of passengers

Indian Navy’s P-8I and Dornier are scheduled to be launched in the afternoon for undertaking aerial survey to assess the extent of impact and devastation due to cyclone fani crossing the coast.

Cyclone Fani will weaken in next three hours: IMD

In the next 3 hours, Cyclone Fani is expected to weaken with a wind speed of 150-160 km per hour, subsequently it will weaken and move north-northeastwards. By evening, it may weaken into severe cyclonic storm over extreme northern part of Odisha: IMD

No flight to and from Kolkata Airport from 3 pm today to 8 am tomorrow. Closure timing revised from earlier announced 9.30 pm today to 6 pm tomorrow, says Airports Authority of India.

Damaging houses, thousands of trees and electricity poles, uprooting trees, the eye of Fani almost 25 km in diametre is sending off wind velocity of 150 to 175 kmph and even above at some places touching 180 or more, said the Indian Meteorological Department (IMD).

West Bengal Chief Minister Mamata Banerjee is staying in Kharagpur, near the coastal belt and monitor the situation , today and tomorrow. All her political campaigns for the two days have been cancelled. Read here

Cyclone will move to Bangladesh after weakening: IMD

After landfall, cyclone Fani is very likely to move north-northeastwards, weaken gradually and emerge into Gangetic West Bengal as a severed cyclonic storm and move to Bangladesh after weakening, the IMD said. 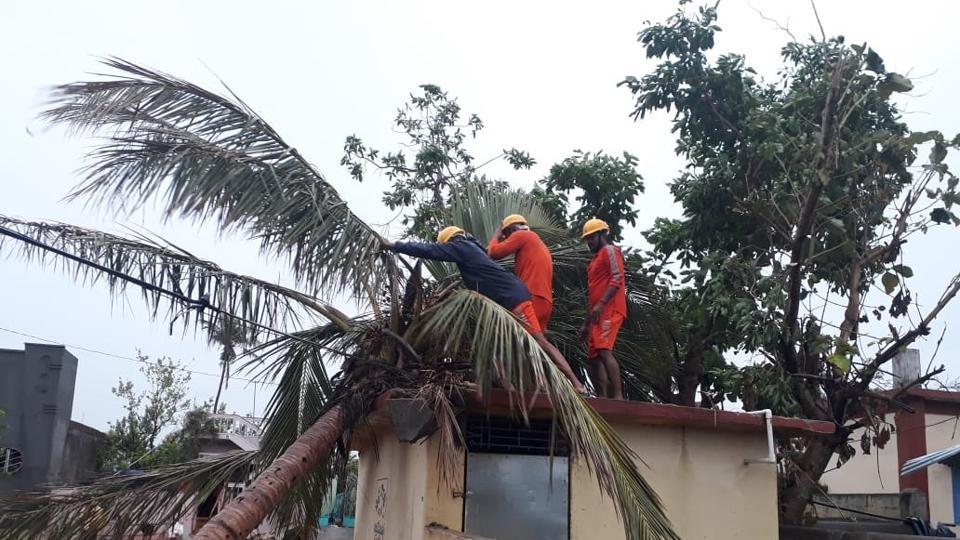 Eye of cyclone Fani will completely cross land in next 2 hrs: IMD

“Landfall started at 0800 hrs IST (0230 GMT). Part of eye lies over land at 0830. Entire process of eye entering into land will be completed in next 2 hrs,” India’s Meteorological Department tweeted.

Cyclone Fani has made landfall in Odisha’s Puri, reports ANI.

The highest number of people -- 3 lakh -- were evacuated from Ganjam district while 1.3 lakh others from Puri district, said an official from the Special Relief Commissioner (SRC) office. People evacuated for safety rest in a temporary cyclone relief shelter in Puri in Odisha on May 3, 2019. ( AFP )
8:41 am IST

5000 kitchens set up for people in shelters

About 5000 kitchens started operating to serve people in the shelters, the Chief Minister’s office said.

More than 1 million people have been evacuated from vulnerable districts in last 24 hours in Odisha. Ganjam and Puri evacuated more than 3 lakh & 1.3 lakh people respectively to safe shelters.