Delhi: 55-year-old mowed down by speeding car in Vasant Vihar

The driver of the car, who, according to the police, was taking a joyride with his friends ran away, but was arrested on Friday morning. The police said that based on a medical examination conducted on Friday, he was not drunk at the time of the incident.

A 55-year-old man was killed after a speeding Mercedes-Benz car driven by a 18-year-old son of a diamond exporter hit his scooter in south Delhi’s Vasant Vihar outside a market on Thursday night, police said.

The driver of the car, who, according to the police, was taking a joyride with his friends ran away, but was arrested on Friday morning.

The police said that based on a medical examination conducted on Friday, he was not drunk at the time of the incident.

The mishap, which happened at around 11.45 pm has been captured on a CCTV camera installed outside a shop in the market. The victim, Antony Joseph, a security guard, was on his way to meet his wife, who works in Vasant Vihar.

The driver, Aryan Jain, was returning home with his two friends after a late-night drive in a Mercedes E 250 car, the police added.His car was coming from Outer Ring Road and was on the Vasant Marg.

As it reached the A-block market, it hit a scooter that came out from a lane and took a right turn onto Vasant Marg.

After hitting the scooter, the car rammed a tree and a telephone junction box, uprooting both of them , before crashing into the boundary wall of a bungalow and its guard room. The trio panicked and fled, the police said.

Jain was identified and arrested on Friday morning after the police established the ownership of the car and contacted his family, which brought him to the police station. He was booked for rash and negligent driving causing death, and released on bail.

“Jain’s medical examination showed that he was not drunk at the time of the mishap. He claimed that he tried to avoid hitting the scooter and lost control. We are carrying out our investigation to ascertain the exact sequence of events,” said deputy commissioner of police (southwest) Ingit Pratap Singh. 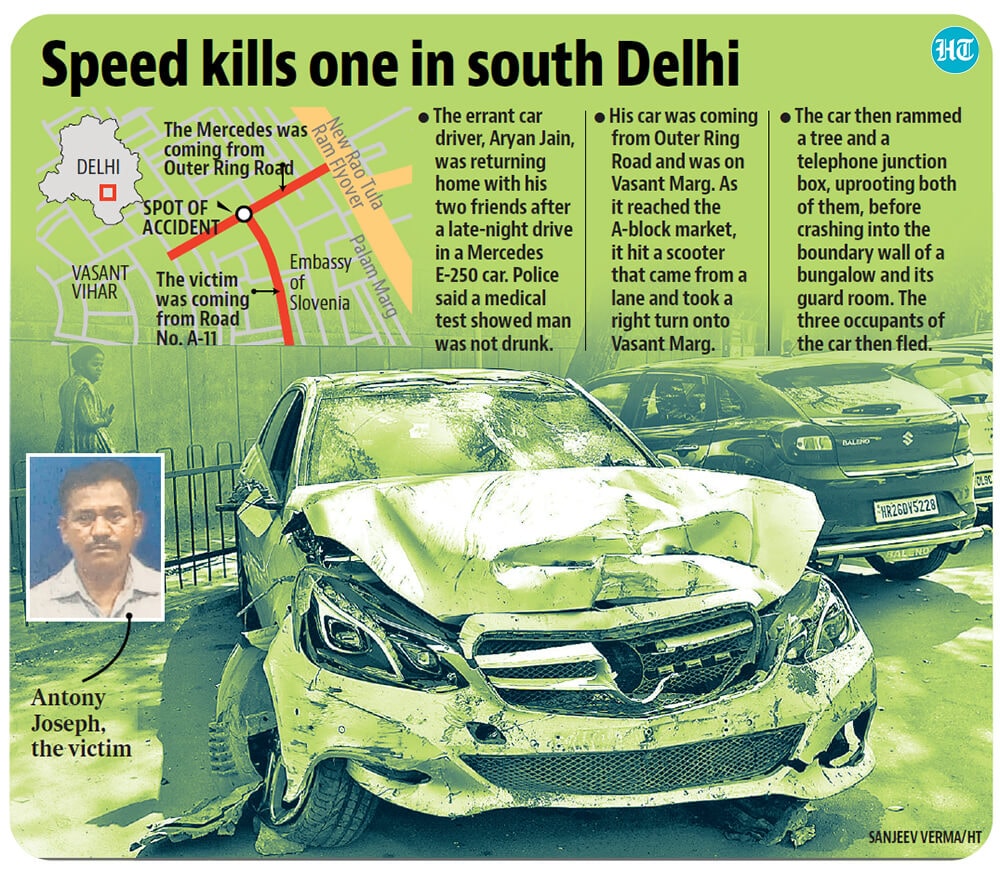 Singh said Jain is studying in a UK university and will turn 19 in March. His father Sushil Jain has diamond and jewellery store at a shopping mall in Saket. “Jain had a learner’s driving licence,” added Singh. It wasn’t clear whether any of the others in the car had a licence. Indian laws allow someone with a learner’s licence to drive only when accompanied by someone with a licence.

“The market was closed when the mishap took place. But when we learnt about it in the morning, we checked the CCTV footage. The footage shows that the Mercedes car was speeding when it hit the scooter. Some security guards who saw the accident told us that the scooter rider was flung several feet in the air while his scooter was thrown nearly 40 feet away,” said Aman Singh, a shopkeeper in the market.

“The car stopped only after hitting the boundary wall and the guard room of a house. Had the car not hit the tree and the junction box, it may have entered the premises of the house after breaking its boundary wall. The scooter rider died on the spot,” said a local resident.

Police said they were informed about the mishap by a local resident, who called the police control room. Joseph was rushed to the AIIMS Trauma Centre, where he was declared brought dead. At the time of the mishap, Joseph was going to meet his wife, who works as a cook at a Vasant Vihar bungalow for expatriates who work in the American Embassy.

Joseph is survived by his wife and a 32-year-old son. Joseph worked as a security guard at a private company in Delhi’s Naraina while his son worked as a guide with a tour and travel company in Delhi. The father and son both lost their jobs between May and June last year because of the Covid-19 pandemic.

The number of accidents during the night hours, when the roads are relatively less crowded, is more compared to the day hours.

SHARE THIS ARTICLE ON
Topics
new delhi
new delhi
Subscribe to our best newsletters
Subscribed to newsletter successfully
Thank you for subscribing to our Daily News Capsule newsletter.