Residents of low-lying areas along the river have been asked to move to safer locations as the water level is expected to reach the 207-metre mark by August 21, as per the Central Water Commission’s forecast.
Share Via
Copy Link
Hindustan Times, New Delhi | ByAbhishek Jha

Although high intensity rainfall in Delhi is decreasing, the threat of flooding persists in Delhi because of an increase in high-intensity and extreme rainfall this decade in Uttarakhand and Himachal Pradesh, states through which the Yamuna passes.

The Yamuna river has been flowing above the danger level of 205.3 metres in Delhi since 19 August. Residents of low-lying areas along the river have been asked to move to safer locations as the water level is expected to reach the 207-metre mark by August 21, as per the Central Water Commission’s forecast.

If it happens, this will be only the fourth instance of the water level of the Yamuna crossing the 207-metre mark in Delhi since 1978.

It is to be noted that while Delhi’s total monsoon rainfall was 966.7 millimetres (mm) in September 1978, the fifth highest since 1950, Delhi has received 274.1mm of cumulative rainfall until August 19 this year, which is only 68% of the long-period average (LPA) rainfall the capital receives until this date.

An analysis of the India Meteorological Department (IMD) rainfall data for Delhi since 1950 shows that high-intensity rainfall during monsoon has been decreasing in Delhi over the last two decades. It is a rise in low-intensity rainfall this decade that has ensured that the total rainfall has not decreased drastically. IMD gives grid-wise rainfall data for India, where each grid is a box covering 0.25-degree latitude and longitude. Delhi consists of two such grids. High-intensity rainfall for Delhi is calculated by adding daily rainfall, if it is greater than 35.5mm, in either of the grids over the total monsoon period (June 1 to September 30) and dividing it by two.

As a result of this, the average share of high-intensity rainfall in Delhi’s total rainfall is the lowest (19%) in this decade, since the 1950s. Values from 2010-18 have been used to calculate this decade’s shares. Locations around Delhi — Gurugram, Faridabad, Gautam Budh Nagar, Ghaziabad, Baghpat, Jhajjar and Sonepat — also show the same rainfall pattern. 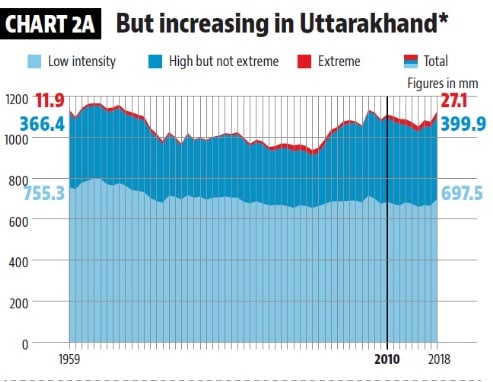 Explaining the current rising level of Yamuna in Delhi, an irrigation department official told ANI that water had to be released from the Hathni Kund barrage in Haryana because of heavy rainfall in Uttarakhand.