According to the latest Crime in India report by the National Crime Records Bureau (NCRB), 70 people died in police custody in 2018. Tamil Nadu recorded 12 of these deaths.

New Delhi: The custodial deaths of a father and son in Tamil Nadu’s Thoothukudi district -- it has created a nationwide uproar with the family blaming police torture -- is not an isolated incident. Crime records and survey reports show that violence by police has been reported across the nation, that police personnel are not adequately trained in human rights, and that they have the tendency to inflict punishments outside the judicial process.

According to the latest Crime in India report by the National Crime Records Bureau (NCRB), 70 people died in police custody in 2018. Tamil Nadu recorded 12 of these deaths, the second-highest in the country after Gujarat, where 14 such deaths were reported. Only three of these 70 deaths were categorised by the police as having occurred due to physical assault by police, while illness was registered as a cause of death in 32 of the 70 cases. Seventeen of these deaths were attributed to suicide, seven to injuries sustained prior to police custody, seven while escaping from custody, one to road accidents or journeys connected with investigation while the remaining three to other reasons.

In 2019, at least 117 deaths in police custody were reported to the National Human Rights Commission (NHRC).

But, according to a report released last week by the National Campaign Against Torture, a joint initiative by multiple non-governmental organisations, deaths in police custody occur primarily as a result of torture. Of the 125 deaths in police custody that the group recorded in 2019, 93 persons (or three in every four) died due to alleged torture or foul play; while 24 died in suspicious circumstances, with the police claiming they either committed suicide or died of illness or accident. The report also said that the practice of torturing suspects in police custody to punish them, gather information, extract confessions, or demand bribes, was rampant. 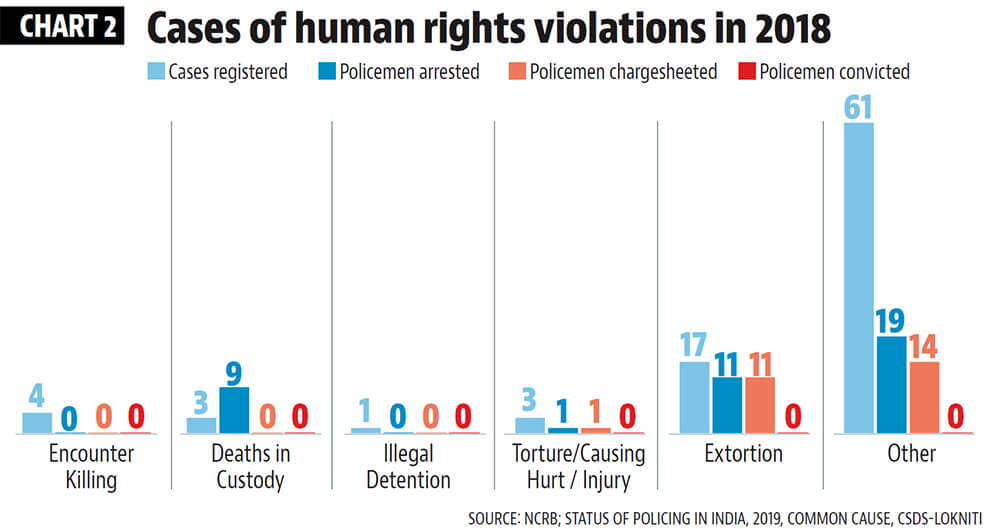 In terms of police personnel being punished for alleged torture and extrajudicial killings, NCRB data for 2018 shows that even as 89 cases were registered against police personnel for human rights violations such as custodial killings and illegal detentions, not a single one was convicted of the crime. Of these 89 cases -- three cases were registered for custodial deaths, three for torture leading to injury, four for encounter killings, 17 for extortion, one for illegal detention and 61 for other kinds of human rights violations.

While nine police personnel were arrested in connection with cases of custodial death, and one was arrested for torture leading to injuries, a charge sheet was filed in just one case till the NCRB report was compiled.

Findings from the Status of Policing in India report, released last year by non-governmental organisations Common Cause and CSDS-Lokniti, showed that the police in India suffers from inadequacies and biases which might lead to such behaviour. The report was based on a survey of close to 12,000 police personnel across 21 states.

The report showed that 12% police personnel never receive human rights training. This varied among states and was as high as 38% in Bihar, 31% in Assam and 19% in India’s most populous state Uttar Pradesh. Even among the personnel who received training in human rights, a majority said it was only at the time of joining the police force. The study said this was also true for those who were in the police force for more than five years.

“This has become a very scary situation,” said former director general of police, Vikram Singh, regarding the number of custodial deaths being reported each year. “The most scary dimension is the fact that nobody has been punished in the 100-odd police custodial deaths in the year 2018 and the year before. The cases aren’t being pursued rigorously, and if you don’t pursue cases rigorously, the witnesses turn hostile, and it gives a sense of impunity to policemen.”